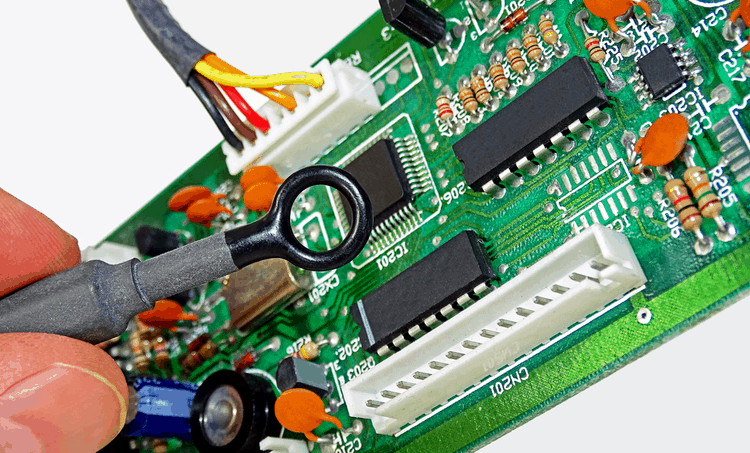 All PCBs should pass the EMC test before hitting the market

In electronic systems, PCBs are sources as well as victims of electromagnetic interference (EMI). At high frequencies, the interconnects in a PCB act as transmitter antennas and start to emit electromagnetic waves, affecting the function of nearby devices. These interconnects can also perform as receiver antennas. They absorb the radio frequency and high-frequency signals from their surroundings and carry them to the board.

In any system, including PCBs, EMI is generated from an EMI source and requires a coupling path to reach the receptor. According to the propagation path, EMI can be either conducted EMI or radiated EMI. Conducted emissions are conducted via power lines, cables, and traces. Radiated emissions propagate through the air from the PCB and interfere with the devices in its vicinity.

It is both the best practice and most cost-effective method to control the EMI in a PCB right from the initial stage of design. It is difficult to modify a design in later stages, as electromagnetic emissions are influenced by component selection, circuit design, and layout design.

Before an electronic device reaches the market, it should pass an EMC test.  EMC in PCBs means the ability of the board to function satisfactorily within an electromagnetic environment without generating electromagnetic and radio frequency interference in nearby devices. When the operating region of a device deviates from the defined standards or conditions, the system performance gets influenced by EMI. EMC makes the PCB immune to EMI under the defined operating conditions.

A PCB design can be said to have electromagnetic compatibility when:

For EMC in PCB design, plenty of rules and guidelines are available, but following all of them to design a single PCB is unnecessarily time-consuming. That is why it is important to understand which  PCB EMC rule applies to the particular circuit you are working on. Here are some general guidelines that are helpful when suppressing EMI.

Use a Dedicated Ground Plane

Grounding in PCBs is a major challenge to reducing EMI. A ground with low inductance is necessary for EMC in PCB design. Increasing the ground area is one method to reduce the ground inductance, which results in reduced EMI.

Long signal return paths create ground loops that act as radiating antennas. By decreasing the length of the signal path, impedance and EMI in a PCB can be reduced. In PCB design, it is important to reduce the ground loops in the ground plane. A multi-layer PCB with a solid ground plane is a good alternative to partitioned ground planes, which cause current loops that are sources of EMI. To reduce the noise in the power and ground reference planes, place decoupling capacitors at the edge of the circuit. In high-frequency circuits and digital circuits, large, solid ground planes can be used to suppress EMI, as they offer a low impedance path. Multi-point grounding is another remedy to EMI, as it can reduce the ground loop currents and ground impedances of planes.

Using a dedicated ground plane is a good practice in PCB design. In the presence of the ground plane, all the device grounds should be connected directly into it. However, there are some exceptional cases, such as a two-layer PCB where a ground plane layer is not possible. In such layouts, utilizing ground grids is recommended.

Deactivate the Antenna Property of the Traces

It is a general rule to separate signals from other traces. The adjacent traces should be separated by a distance equal to 3W, where W is the width of the trace. In the case of differential traces, route them closely to increase the coupling factor and keep EMI in common-mode, which can get canceled out.

While multi-layering, critical traces should be routed on the same layer and vias should be avoided as much as possible. If using vias, make sure that ground vias are placed closer to the signal vias. In differential traces, it is advisable to maintain the same number of vias in both traces.

Impedance matching is critical for EMC. Any design that changes the characteristic impedance makes PCBs less EMI-friendly. The sharp 90° turns in traces are capable of increasing capacitance, which changes the characteristic impedance. It is a good practice to replace the sharp 90° angle traces with 45° turns, which helps to achieve EMC. In highly sensitive, high-frequency traces, stubs produce reflections and induce fractional wavelength antenna properties in circuits. It is a best practice to avoid stubs in such circuits.

Signal isolation from the power plane and ground plane can be achieved through multi-layer PCBs. In this type of PCB, the signal layers are placed between the power and ground reference planes. There is enough space between each signal layer and between signal layers and voltage layers that the antenna property of the traces gets deactivated. It is important to isolate the sensitive circuits from one another by using multiple power distribution buses.