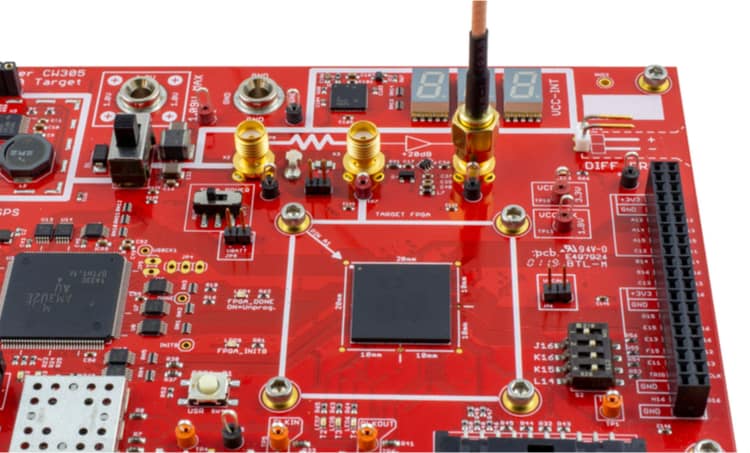 Every high speed PCB will have power and ground planes, and their plane resonances could be excited by propagating electromagnetic waves

We often like to think about electronics in terms of circuit diagrams and equivalent circuits, but this eventually breaks down and we have to consider the high frequency characteristics of real electronic systems. In real PCBs, the propagating characteristics of electrical signals will dominate system behavior, including for something as simple as DC power distribution. DC power, particularly as it is drawn into a board by integrated circuits, is not really DC, which creates strongly resonant excitation in a PCB.

The power and ground plane arrangement in your PCB form the basis of power distribution throughout your board and need to provide stable power to components. In reality, there are important transient effects that occur in any circuit board and the structure of plane layers in the board plays a role in determining the emission spectrum at very high frequencies. This is where power plane resonance analysis becomes useful for understanding where the circuit description of a PDN ends and where you’ll need to think about your plane arrangement in terms of waveguide behavior.

If you’ve ever looked at an impedance plot for the PDN in your PCB, you’ll notice that the plot has some resonant behavior at high frequencies. These frequencies generally fall into the GHz range and higher, depending on the structure and size of your circuit board. When the power and ground planes overlap in a PCB, the structure they create will form a semi-open parallel plate waveguide that has some distinct resonances. The image below shows an example PDN impedance spectrum measured on a PCB, which includes resonances that can be seen at high frequencies. 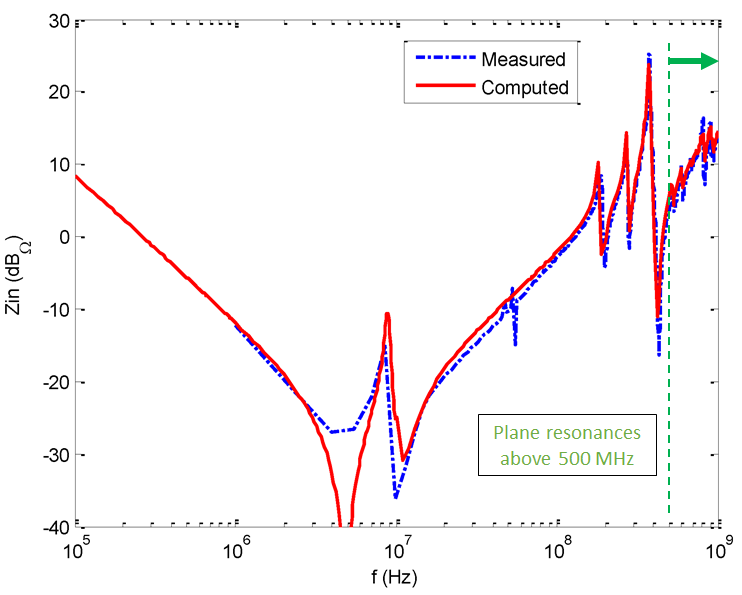 For a board with dimensions a and b, and with spacing between power and ground given by h, the resonant frequencies are:

The chip also has its own PDN, so logic would dictate that it also exhibits some resonances that can be excited by an incoming transient oscillation on the board’s power rails. However, this is not the case except up to extremely high frequencies simply due to the geometry of the chip and its PDN.

The Transition From Board to Chip

The image below shows an example simulation of the PDN impedance measured in three different ways. The blue curve shows a typical PDN impedance curve for a CMOS integrated circuit measured on the main power rail for the chip. This is the type of curve that would be measured directly on the die after any passive regulation section; note that this does not include pin-package inductance due to the bond wire or lead frame. This is placed in parallel with the board impedance, which is assumed to be strongly decoupled and has a relatively flat impedance above 10 kHz. The red curve shows the parallel equivalent of these two impedances. 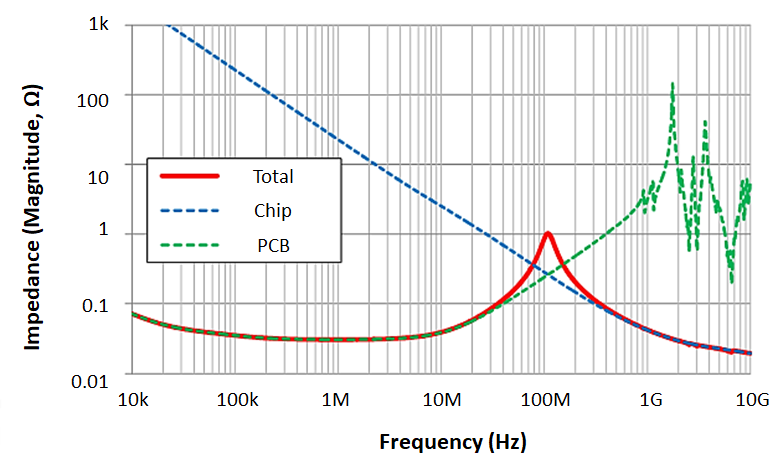 Total impedance for a chip + board package (red curve). Note that the high impedance resonances are not seen on the die

In this example, the total impedance shows an antiresonance at ~100 MHz, but it is relatively weak with only ~1 Ohm impedance. The rest of the curve is quite flat and overlaps with the low impedance portion of the board at low frequencies, and with the chip’s PDN impedance at high frequencies. The chip PDN also has high impedance resonance/anti-resonance pairs, but they are at such high frequencies that they cannot be seen in the above window. The presence of chip caps on the PDN also helps keep the total impedance low as measured on the chip.

Just as an example, we can compare the impedances of the lowest order waveguide modes for the board and chip in a simple exercise. In the above example, the lowest order board resonance is only 2 GHz; if we assume the power rail to ground distance on the die is only a factor 10 smaller than on the PCB with ~1 cm2 chip dimensions, then the lowest order resonance in the chip PDN is will already exceed 20 GHz. The exact resonant frequencies in a complex structure like the PDN on an integrated circuit or a circuit board shouldn’t be treated with circuit models. Instead, these resonances are best determined with a field solver application that pulls data directly from the physical layout.

Cadence’s PCB design and analysis software can be used to simulate board and circuit behavior as part of power plane resonance analysis. You can then use your data in any modeling application to calculate cross spectral density and analyze signal behavior. When you use Cadence’s software suite, you’ll also have access to a range of simulation features you can use in signal integrity analysis, giving you everything you need to evaluate your system’s functionality.