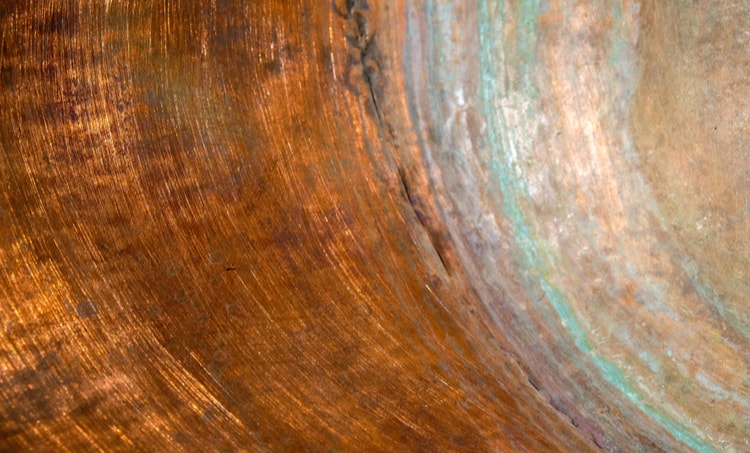 Transmission lines come in many forms, such as coaxial lines, printed traces on a PCB, or long cables or wires. All of these structures share some similar behavior relating to how an electromagnetic wave travels along the interconnect. Although these structures are fundamental for guiding a propagating electromagnetic disturbance along an interconnect, there is often a misperception as to how signals travel on transmission lines.

In particular, the electromagnetic signal on an interconnect exists around the line, meaning signals are propagating in unbounded conductive media as they travel. In other words, transmission lines are really waveguides, and the structure that supports wave propagation will determine the impedance seen by signals on the line. Once you get to higher frequencies and TEM behavior stops dominating wave propagation, it helps to take a wave impedance perspective to understand signal behavior.

Take a look at the Telegrapher’s equations and you’ll see that the definition of signal behavior on a transmission line is in terms of the voltage and current. This is very useful for understanding how voltage and current sourced by a driver component will travel along an interconnect to a receiver component. For PCB designers, this is important information, particularly for understanding how losses reduce signal levels at a receiver.

The equation shown above is universal in that it considers the electric and magnetic fields on the interconnect, rather than the voltage and current from the Telegrapher’s equations. Although the results can be made equivalent, the reality is that impedance depends on the ratio of these fields. Here, the wave impedance will vary across the frequency domain and tends to a constant value, just like we would see in a typical transmission line. In fact, this is the definition of impedance used in conformal mapping to determine transmission line impedance equations directly from the wave equation. See the seminal textbook Transmission Line Design Handbook by Brian C. Waddell for some famous results for common PCB trace geometries.

From here, we can describe in full how a signal propagates in unbounded media, including conductive media.

In the above equation, the wave impedance depends on the conductivity of the medium in which it travels. We usually have three possibilities in practice media:

Once you bring a ground plane close to your conductor, as is the case in real interconnects, you no longer have signal propagation in unbounded conductive media, and we need to consider how the boundary conditions affect wave propagation.

All Media is Bounded Somewhere

All conductive media and the region surrounding it are bounded and affected by some boundary conditions. The skin effect also arises around conductors due to the interaction between the electromagnetic field and charges in a conductor, but the fields around the conductor will still be affected by the presence of ground references, other conductors, absorbers, and anything else that defines an interface between two media. It is the boundary conditions that will determine the characteristic (lossless) impedance, the wave impedance, and propagation constant for the interconnect.

There are two ways to determine the impedance in any real system:

As an example, consider the stripline shown below. Along the y-axis, we have two boundary conditions where the electric fields terminate at the conductive reference planes. Along the x-axis, there is no boundary in this theoretical problem, although we do have a flux-conserving boundary condition at infinity located in the x-z plane. 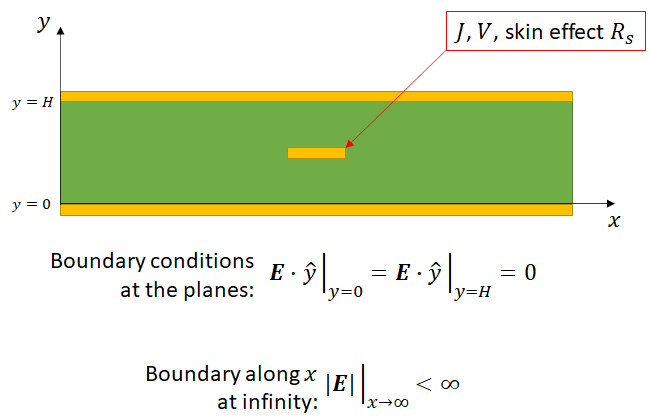 Even a relatively open waveguide cavity like a stripline has some boundary conditions that determine the impedance, propagation constant, and signal losses

Here, the boundary conditions define a dispersion relation that determines the propagation constant in terms of the structure’s eigenfrequencies. The skin effect occurs in all conductive boundaries around the signal, and this will influence the dispersion relation and the resulting wave impedance in the interconnect.

Analytically, this is a complex transformation that accounts for skin effect losses, copper roughness, and dispersion in the PCB substrate. At mmWave and higher frequencies, the wave behavior becomes dominant and the interconnect no longer behaves as a TEM waveguide. This is also very important at lower frequencies used in standard wireless protocols, particularly in antenna design. With the right 3D field solver utility in your PCB design software, you can visualize the electromagnetic field in your interconnects, determine wave impedance and impedance matching, and directly calculate important quantities like power transfer in your interconnects.

When you’re designing high-speed/high-frequency interconnects and you need to account for wave behavior in signal propagation in unbounded conductive media, use Cadence’s PCB design and analysis software to build and evaluate your designs. Cadence provides the industry’s best CAD tools for PCB design and powerful signal integrity analysis tools that help automate many important tasks in systems analysis. Cadence’s suite of pre-layout and post-layout simulation features gives you everything you need to evaluate your system.