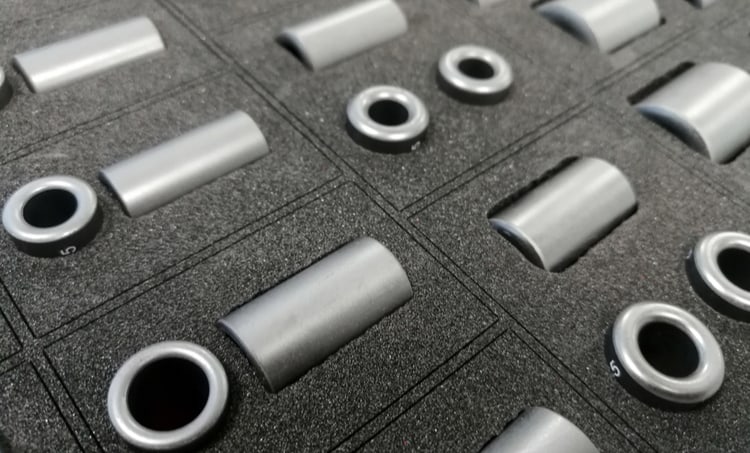 Ferrites come in all shapes and sizes, and they’ll be used to remove EMI on input cables in your power system

When we talk about EMI, it is usually in the context of high-speed/high-frequency PCB layout, where routing mistakes and poor stackup design produce excess crosstalk during operation. However, EMI also interferes with power integrity and reliability, particularly during power conversion. Any device that pulls its power from the grid can receive noise during operation, both from the input power lines and due to unintended feedback that couples noise back to the input.

Enter EMI filters, which can be used to clean up noise throughout a power conversion system. However, when using EMI filters, there are some things designers should consider. In particular, a common question is where to place the bridge rectifier and EMI filter stages to provide maximum noise reduction. By taking advantage of multiple EMI filter circuits and components, a designer can properly remove noise from power conversion.

Where Should Bridge Rectifiers and EMI Filters Be Placed?

Some designers will argue about whether to place an EMI filter before or after a bridge rectifier in a power converter. In general, there are some specific points in a power converter where EMI filtration occurs, either with intentionally placed filters or due to the inherent function of each conversion stage.

The block diagram below shows the general layout of a production power converter system and the locations of some standard EMI filter components. EMI can result from unintended coupling anywhere along the signal path in this block diagram.

Here, there are several instances where EMI filters are placed around a bridge rectifier to help reduce or eliminate conducted EMI. Typically, the coupling mechanism between different sections of this converter block diagram will determine the type of noise that propagates to the output, and the different filter blocks in the above image will address specific noise sources along the signal chain. Note that radiated EMI is not specifically addressed in the above block diagram because, practically, it could be received in any stage of power conversion.

Also omitted from the above block diagram is common-mode choke placement, which could be placed at the input or output, depending on the strength of common-mode noise in the system. Generally, ferrite beads only act as a differential band-stop filter, not as a common-mode choke, so this noise source would still need to be addressed in three-phase AC systems as well as in any system with strong parasitic coupling involving chassis ground.

The table below summarizes the role of each of the EMI filter components in the above block diagram.

Since EMI filters won’t eliminate all noise sources in a power system, some other steps should be taken to help clean up noise on the power rail. Design tools with an integrated SPICE engine and electromagnetic field solver can help you pinpoint noise sources and experiment with methods to eliminate them.

When you’re designing advanced power systems that use bridge rectifiers and EMI filters, make Cadence’s PCB design and analysis software your go-to application for every task in electronics design. You’ll have access to a range of simulation features you can use for pre-layout design evaluation to ensure stable power delivery, and you can seamlessly move into physical layout with schematic capture features and a complete set of CAD tools.