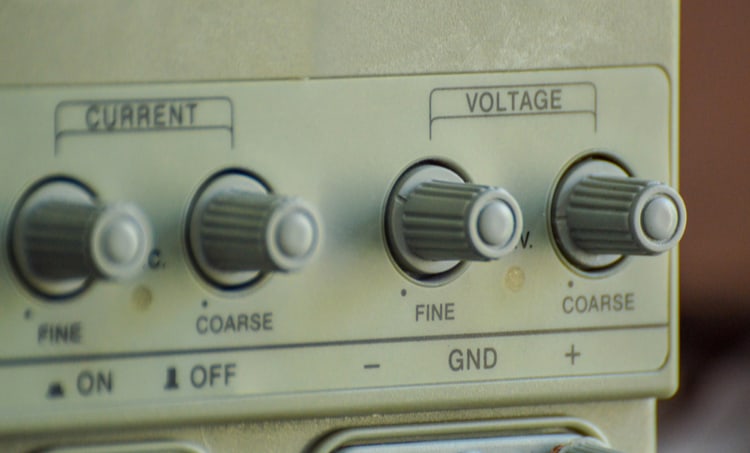 Adjustable DC power supplies generally operate with a switching converter that provides some stable output voltage with noticeable ripple. If you’re integrating a switching converter into a PCB, then the output will contain some switching noise. There are several pieces in a power supply that are difficult to implement in an on-board boost converter, and the noise in the output could be quite strong when the waveform is viewed on an oscilloscope.

A boost converter waveform comprises two components: a nominal (average) DC output and noise generated by the switching waveform that appears as a ripple around the nominal DC value. This is the basic form of output voltage/current in the continuous mode for a boost converter. There is also the discontinuous mode to consider, where the converter goes out of regulation due to insufficient duty cycle and R/L rise rate. With the right set of simulation tools, designers can identify operating mode from a boost converter waveform simulation and experiment with component values that ensure stable power delivery.

The output waveform from a boost converter depends on the mode in which the converter operates. There are two possible operating modes in any switching regulator: continuous and discontinuous operating mode. Boost converter waveforms in each mode will be different and can be identified entirely by looking at the inductor current. Be careful when looking at the output current, as there could be some compensation in a complicated load network when reactive (highly capacitive) components are present.

If you perform a transient analysis simulation for a regulator circuit or if you gather measurements from an oscilloscope, you’ll be able to identify the mode in which the converter operates.

Continuous conduction mode is the simplest operation mode for any switching regulator. In this mode, the current in the inductor, and thus the output current, never falls to zero during switching; although it will exhibit some oscillation during switching. This occurs because the rise/fall time of the converter when the switching element activates is very long, so the output current can be maintained by the discharging capacitor. This can be regarded as a pseudo steady-state operating mode with some added noise. An RMS measurement of this noise, or a power spectral measurement, can be used to determine the level of filtering needed to produce stable DC power. 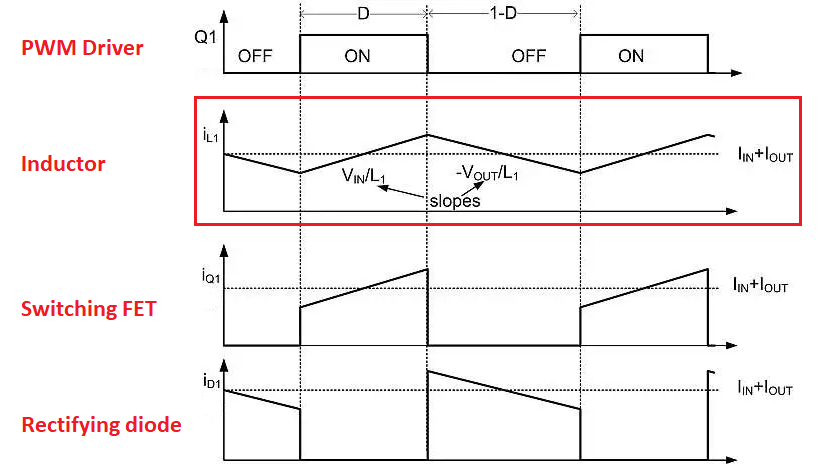 The most important waveform in the above set of graphs is the 2nd waveform (the inductor current). In this waveform, we can clearly see the ripple present on the nominal current. The output voltage and current waveforms will resemble this, depending on the level of reactive impedance in the load network.

Once in discontinuous conduction mode, the waveform will be a discontinuous function and will have periods with zero output current. This can be smoothed with a large output capacitor, but the ripple could be unacceptably large and the design will have low power factor. In addition, these designs tend to exhibit some transient ringing on the falling edge of the inductor waveform because the system is no longer being periodically driven, resulting in large underdamped oscillations on the output current waveform.

Typically, this state is not entered because the duty cycle suddenly becomes too short. The proper way to compare these modes is to compare the ripple current with the nominal input current.

This can also occur because of an unintentional mistake in the design, where the inductor is made too small, and thus the fall time in the converter is too short for the given duty cycle. When a circuit designer makes this mistake, they tend to find there is no way to re-enter the continuous conduction mode simply by increasing the duty cycle; the fall time in the inductor is just too short. In addition, increasing the duty cycle will change the output voltage, and it may not be possible to hit the desired output.

There are four possible solutions to get the design back into continuous conduction mode without requiring a change in the duty cycle:

Points 1 and 2 might be prohibitive in designs that have a low profile or small form factor. What’s interesting is that point 4 can eliminate the need for points 1 and 2, which is one of many reasons power supply designs for modern digital and wireless systems are running at high kHz or MHz switching frequencies while simpler DC designs continue to run at low (~100 kHz) frequencies.

The complete set of system analysis tools from Cadence include integrated PCB layout simulation features and a SPICE simulation package to help you build the best switching converter designs. With the transient analysis tools in Cadence’s design software, designers can simulate a boost converter waveform and ensure their design is operating as expected. The complete set of simulation features in powerful field solvers integrate with circuit design and PCB layout software, creating a complete systems design package for any application and level of complexity.