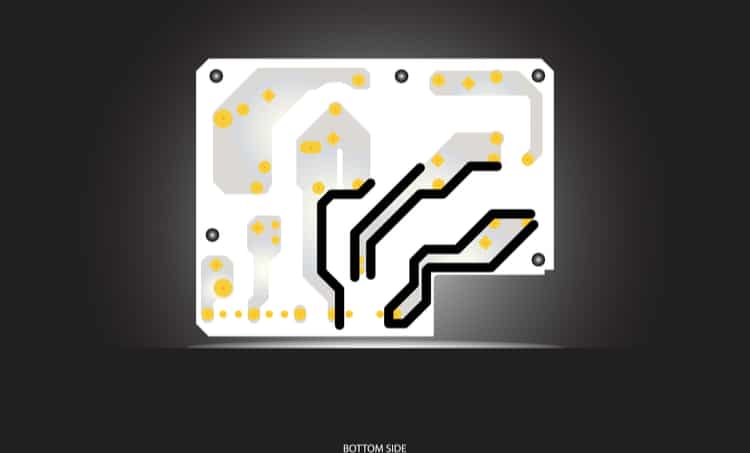 Even though the PDN in a PCB is made up of conductors, it has an impedance spectrum. In addition, the nature of power regulation in a PCB means that the DC power delivered to a load component is not really DC power. All-DC systems are actually quite rare, and real systems use digital components that draw current in bursts, rather than in the steady manner we imagine in DC circuits.

It’s a paradox that a DC power delivery system should be analyzed as an AC system, but the nature of digital components and the way they draw current in the time/frequency domains forces us to consider the impedance of a PDN. As part of high speed digital design, PDN impedance analysis is important for ensuring power stability when your digital components operate. If you’re new to high speed design and keeping your PDN impedance low, we’ve compiled a list of guidelines and analysis techniques for understanding your PDN impedance and its effect on power integrity.

The PDN in a PCB has multiple elements that contribute to its impedance. At zero frequency, the impedance is only the DC resistance defined entirely by the conductivity and geometry of all conductors in the PDN. Above DC, the impedance can be a very complicated curve in the frequency domain due to the complex geometry of the conductors in a PDN. Just as is the case with a typical high speed interconnect, a PDN will have some impedance that defines how the electromagnetic field interacts with the structure.

Whenever a component in a PDN on a digital PCB switches states, the component will draw a burst of current into the PDN during the switching event. Just like other systems with some reactance, this can lead to an oscillating voltage seen at all components on the PDN, depending on the form of the PDN’s transfer function and impedance spectrum. Complex underdamped oscillations in a PDN are measurable with a near-field probe or an oscilloscope. An excellent example showing voltage driven oscillation on the PDN and the later transient decay is found in the image below: 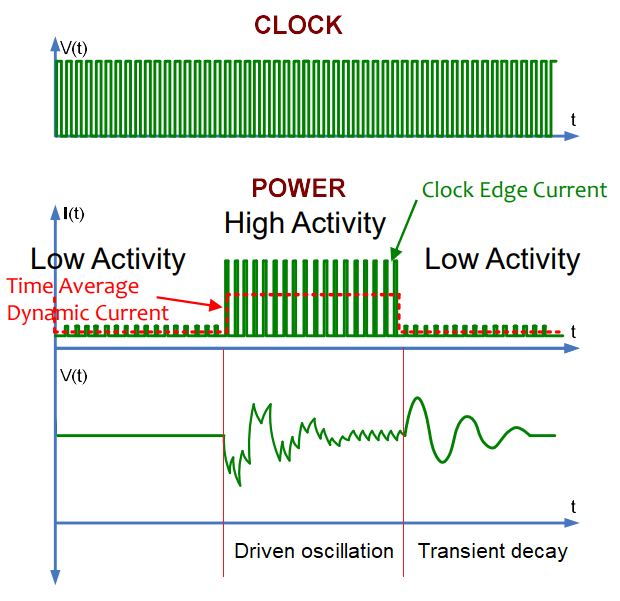 The above graph shows the current drawn into the PDN by a switching digital component and the voltage that reaches the component as measured on the component’s power rail (called PDN ringing or power bus ripple). When the component stops switching, there is a transient decay back to the nominal DC voltage supplied to the PDN. The impedance will determine how the drawn current waveform produces a voltage fluctuation seen at the downstream integrated circuit, just like the driven and transient oscillatory responses seen in an RLC circuit.

Generally, you will not always measure this type of waveform. Instead, you might use an impulse response measurement to determine the PDN impedance. A test signal is sent into the feed port of the PDN, and the system’s impulse response is measured elsewhere on the power bus. Regardless of the sourcing signal used to determine the PDN impedance, these two measured waveforms can be used to calculate the impedance of the PDN directly.

If you look at the impedance spectrum for a real PCB with an array of decoupling capacitors, you’ll see a complex curve that varies throughout the frequency domain. An example with major contributors is shown below.

In this image, various peaks and dips in the spectrum are determined by the physical structure of conductors in the PDN, plane capacitance, size and self-resonances of any decoupling capacitors, load capacitance, and parasitic inductance in the PDN.

The above spectrum can be measured with a network analyzer, but real PCBs will not be designed to accommodate such a measurement. Instead, you would need to use time-domain measurements to calculate the impedance spectrum in the frequency domain. In terms of Fourier transforms, we have the following equation for PDN impedance in the frequency domain:

In other words, if you have your measured voltage fluctuation and current waveform, you can convert these to the Fourier domain, then divide them to get the impedance spectrum. This can then be compared with the target PDN impedance.

Comparing With a Target Impedance

Generally, we can quantify a target impedance we would like the PDN to have in terms of the maximum peak-to-peak supply voltage fluctuation and the peak-to-peak current pulse:

The peak-to-peak voltage fluctuation can be as low as 2% of a high-speed component’s logic level or as small as 24 mv for a component with 1.2 V core voltage (FPGAs are a good example). Once the real PDN impedance is determined, it can be compared with the system’s target PDN impedance to determine if PCB layout modifications are needed.

The typical way to compare the measured PDN impedance with the target impedance is to use the L2 norm:

The same mathematical tool is used to compare two S-parameter measurements. From the above, you have a way to evaluate whether the measure impedance meets your target impedance, depending on some impulse response measurements. Note that this is defined in terms of finite bandwidth due to the finite sampling interval used to gather your voltage and current measurements (e.g., with an ADC).

From what was presented above, we looked at PDN impedance with experimental measurements from two perspectives:

Both aspects are very useful because they can be directly used with measurements to better understand the impedance of the PDN in a finished board. However, gaining a full understanding of how different elements in the PDN affect impedance is difficult without a field solver. The best electromagnetic field solver utilities integrate directly into your PCB design tools and will build accurate numerical simulations directly from your PCB layout. You can use this type of software to calculate PDN impedance, network parameters, and transient behavior.

When you’re designing advanced electronics, make Cadence’s PCB design and analysis software your go-to application for every task in electronics design. You’ll have access to a range of simulation features you can use in PDN impedance analysis, giving you everything you need to evaluate your system’s functionality and ensure stable power delivery.