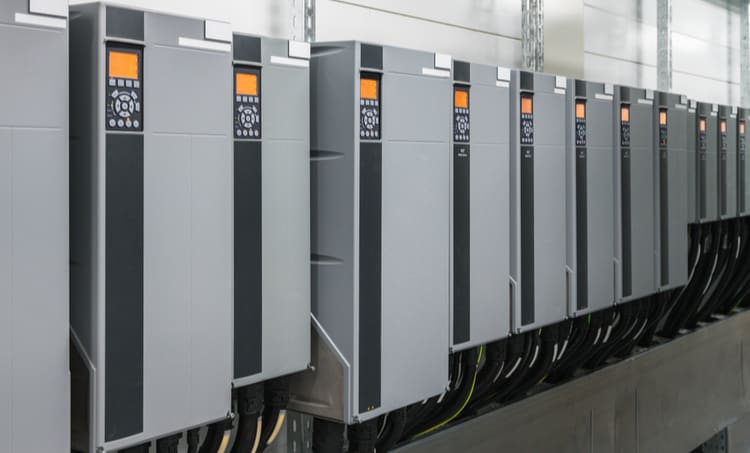 Most designers who aren’t professional power engineers still need to know about a few key voltage regulator topologies. However, power supplies can be much more complex, possibly involving regulation of multiple sources that need to power multiple loads, and all without appreciably interacting with each other. Then there is the need to ensure high efficiency when delivering power to a load.

What is Power Converter Interleaving?

Most electrical engineers are familiar with the fundamental switching converter topologies (buck, boost, and buck-boost converters). These topologies are normally used on their own to produce a single voltage or they are used in stages to cascade an input voltage source to multiple values. The most common topology is to place converters in a series, where converters are daisy-chained to step up/down the input voltage to different levels in parallel.

An example of a single-input multiple-output (SIMO) interleaved buck converter is shown below. The example below shows how this topology is applied in a computer, although it could be applied to any system with a high current power supply with multiple converter stages and a variety of output voltages. 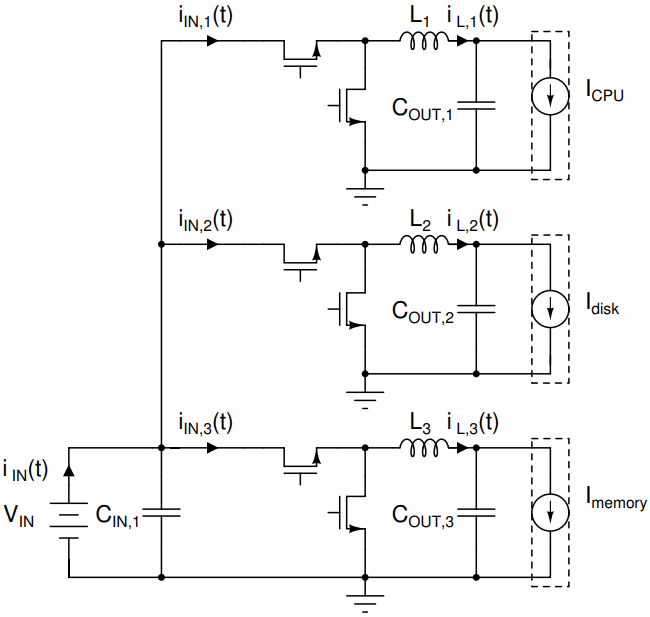 Here, we have multiple switching converter stages, each of which may draw current when the switching elements are active. From here we have to ask the question: how should each of these stages be switched? Do we use a single PWM driver for all stages or multiple drivers? Do we need to synchronize the drivers? This is where symmetric and asymmetric interleaving are used to ensure high efficiency power delivery.

Interleaving is a technique used to synchronize switching in these converter stages. The switching PWM signals used to drive each stage are separated by some phase difference, where the total phase on all PWM signals sums to 2π. There are several goals involved in using interleaving:

Just to illustrate the advantage of interleaving, consider the output capacitor and inductor in a buck, boost, or buck-boost converter. Normally, when the converter is operating in the continuous conduction mode, the strategy to reduce ripple is to increase the size of the capacitor and inductor in the converter. With symmetric interleaving, you can reduce the ripple current without increasing the size of the inductor.

Asymmetric interleaving operates under a similar idea as symmetric interleaving: by properly synchronizing the PWM signals used to drive each converter stage, you can reduce the ripple current. However, there is an additional goal: to eliminate harmonics in the output current.

In asymmetric interleaving, the PWM signals used to drive each converter stage may not have a definite phase or frequency relationship. PWM signals can have dozens of prominent harmonics in the output current. Asymmetric interleaving can be used to target specific groups of harmonics in the frequency domain, or to try and target the entire ripple waveform in the time domain, as shown below. 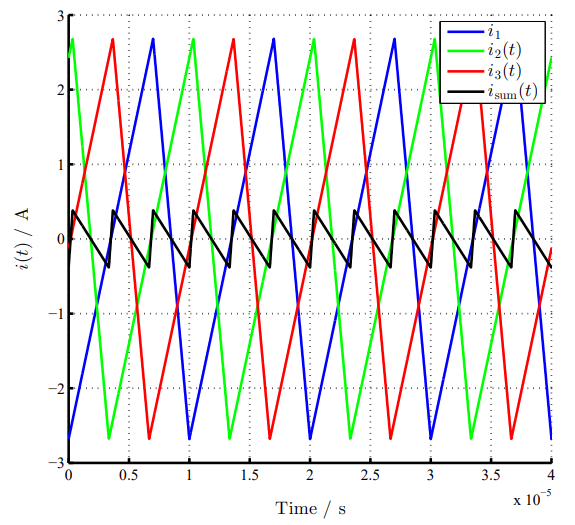 Example time-domain ripple current for a 3-stage interleaved DC-DC converter in the discontinuous mode. The PWM signals are not replicas shifted in phase, they might also be shifted in polarity and magnitude

One challenge involved is properly constructing synchronization between the PWM signals in the system to ensure reduction of target harmonics. There are some complex algorithms that can be used to design an interleaving strategy, depending on the desired reduction in harmonics and total average ripple. Two seminal articles on the topic can be found in MDPI from Arango et al.:

If you’re connecting a high power converter to the grid, then your local regulations likely specify limits on total harmonic distortion in the waveform drawn into the system. These limits are intended to reduce electricity waste. For a system that plugs into the grid, this is normally implemented with a PFC circuit. A PFC circuit can also be placed on each converter stage to further increase the total power factor of the system during AC-DC conversion.

For DC-DC applications, interleaved power converters are often used in renewable energy. A common application of interleaving is in charge collection and maximum power point tracking in solar arrays. A typical topology for charging a battery bank is shown in the image below:

Interleaved buck converters for battery charging in a solar array

By increasing the power factor with asymmetric interleaving, more real power is delivered to the load rather than delivering reactive power. This is quite important, as real power is needed to charge a battery pack connected to a solar array. The above topology can be implemented for any number of converters, expanding up to a very large solar array.

No matter what type of power system you’re designing, you can implement an asymmetric interleaving strategy for your system with Cadence’s PCB design and analysis software. Use the industry’s best CAD tools to design and analyze power delivery and power integrity in your interleaved DC-DC converter systems. Cadence’s suite of pre-layout and post-layout simulation features will give you everything you need to evaluate your system’s functionality and ensure stable power delivery.