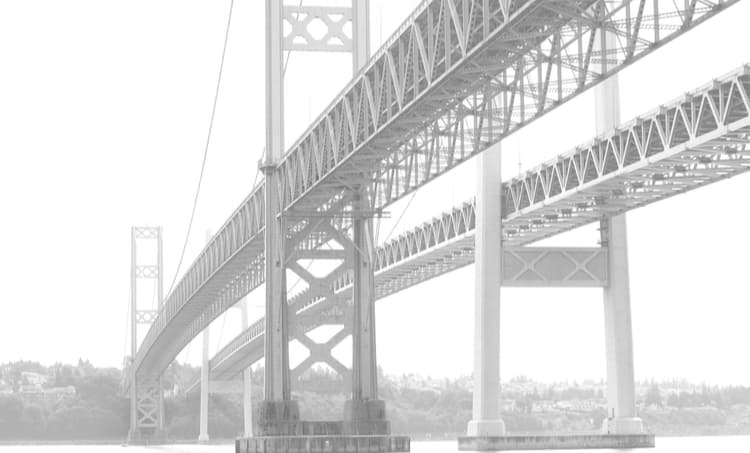 Before being rebuilt following a collapse, the Tacoma Narrows bridge was an underdamped second-order system.

On November 7, 1940, the Tacoma Narrows bridge began undulating under gale winds and eventually collapsed. The oscillation seen across the bridge was so severe that it caused major deformation, leading to structural failure. This was due to periodic forcing under gale winds, which excited a resonance in the bridge and caused large displacements from equilibrium. One can see, just from the fact that a resonance was excited, that this system was underdamped.

Structural engineers have learned from this incident, and now place dampers on structures to prevent these resonances and large oscillations. These underdamped second-order systems are still used as resonators, filters, matching networks, and much more in electronics. These circuits can get  quite complex and involve multiple stages, and extracting the specific resonance and damping parameters can be complicated or intractable for complex circuit networks.

When you have access to a circuit simulator, you can use transient analysis data from your circuits to extract the relevant parameters describing the behavior of your system. This is a much easier process than deriving the transfer function, poles and zeros, or the differential equation that describes your system.

The equation below shows the general ordinary differential equation for a second-order system. The response in the system u(t) depends on two parameters and the forcing function f(t).

Note that this second-order system could be derived using separation of variables for a system with spatial and temporal dependence. The classic example in electronics is any electrically long circuit element, such as a transmission line.

What makes a system underdamped is the value of the damping constant ꞵ compared to the value of the natural frequency ω0. If ω0 < ꞵ, then we have an underdamped second-order system and the transient response will be an underdamped oscillation. The response would appear like that shown below. Note that this looks like a form of ringing; any circuit with resonance has the potential to exhibit this type of behavior when the damping constant is low enough.

If you have a complex circuit with multiple networks, it can be quite difficult to extract the damping constant and natural frequency analytically. When multiple RLC networks are cascaded, a differential equation such as that shown above can be very difficult to derive using Kirchoff’s Laws and Ohm’s Law. Similarly, determining ω0 and ꞵ from a transfer function may reveal that there are multiple possible values, and finding each value may require solving a third degree or higher polynomial.

However, if you have a SPICE simulator built into your circuit design application, you can get time-domain data showing the transient response. An example is shown below; the orange curve shows the time-domain transient response and the blue dashed curve shows the decay envelope for the system. This curve was taken using a unit step function as the driving stimulus, and the current in the circuit was measured in the simulation. 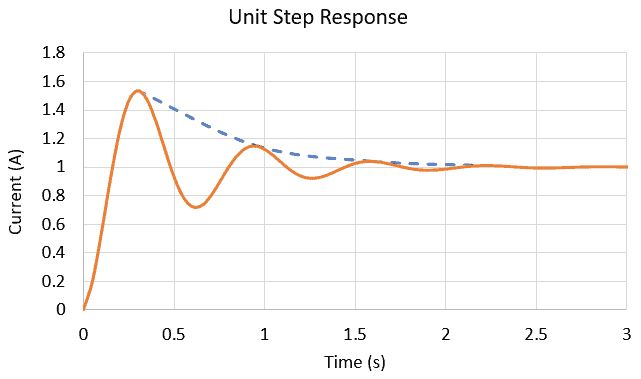 The damped oscillation frequency can be seen immediately in the orange curve; it’s just 2π divided by the time between peaks in the transient response. You can then calculate the natural frequency from this value. 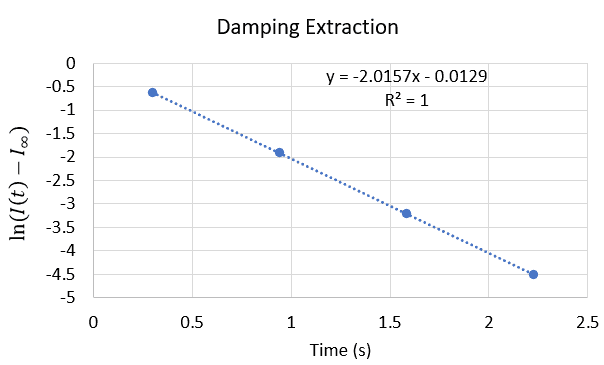 What about frequency-domain calculations? This is where you need to look at poles and zeros in the transfer function. Properly interpreting the poles in these systems is very important, as it helps explain stability, instability, transient behavior, and resonance in a single plot. This reveals some implicit assumptions in the above examination:

The transient behavior in the frequency domain can also be examined using a circuit simulator built into your circuit design tools. When you have complex systems that require transient modeling, you can gather time-domain transient responses or determine the poles from a transfer function for underdamped second-order systems.