Abstract: In a joint effort, Cadence CFD and ISimQ have developed a new mesh adaptation procedure that is well suited for challenging turbomachinery CFD simulations. The automated adaptation creates a mesh that robustly conforms to the underlying geometry, respects user-defined locally anisotropic boundary layer mesh refinement for efficiency, and is driven by an adaptation sensor that accurately resolves large as well as subtle secondary flow features. The method seeks to control numerical error in the discrete solution by minimizing the truncation error based on the CFD solver. An adaptation sensor is developed for a node-centered finite volume CFD solver, including control over the rate at which the mesh size increases with each adaptation step. The benefit of this adaptation procedure is that the mesh quality improves with adaptation, contrary to most mesh adaptation methods, where the mesh quality degrades with adaptation. 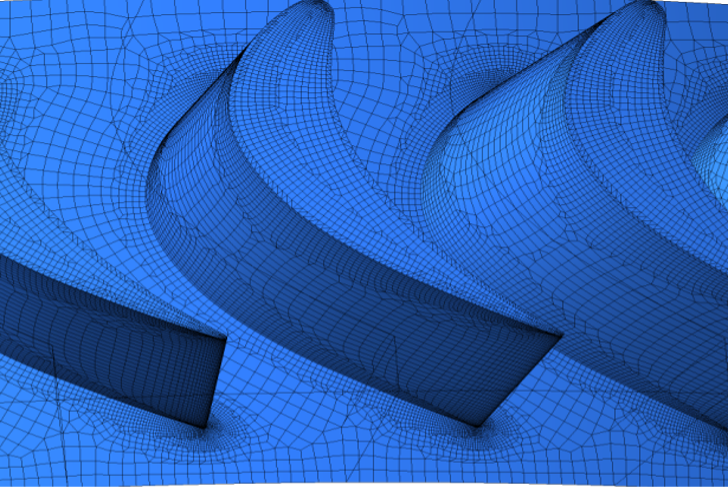 Mesh adaptation procedures have been available for the past three decades. In mesh adaptation, a CFD simulation begins on an initial mesh, and the simulation procedure improves the mesh to reduce the discretization error for the flow at hand. In the first step, the adaptation algorithms estimate truncation errors, for example, by examining the local gradients of the flow variables. Then, they enrich the mesh in the areas of the highest gradients, hoping to reduce discretization errors and determine the "ideal" mesh for the simulation problem. Adaptation sounds impressive. It is available in many commercial CFD packages.

So why are we not using adaptation in our CFD simulations?

The problem is that most mesh adaptation procedures negate the key benefits they are trying to address.

With the demand to push systematic and near-wall turbulence modeling errors to the lowest levels possible, there is a new and challenging requirement to control and reduce numerical error, the error arising from the local mesh size relative to local flow variation. While mesh adaptation has been around for decades, in practice, it often falls far short of the needs of the modern turbomachinery CFD analyst. A useful adaptation procedure must automatically conform to and accurately resolve the complex geometry under refinement, and adaptation decisions must be sensitive to local and subtle flow features. Moreover, the adaptation process must respect the pre-defined near-wall anisotropic mesh region because the isotropic or locally unstructured mesh styles within boundary layers can be disastrous to the total mesh node count and accuracy.

A size field is a continuous scalar function that defines the isotropic element size at any location over the domain. Fidelity™ Pointwise® meshing software utilizes a size field defined by a combination of primitive geometric shapes, mesh elements, and point clouds. The addition of a new size field component is an efficient way to convey mesh requirements from the developing CFD simulation to the mesh generation software. Moreover, continuous size field interpolation operators ensure size field smoothness, a necessary condition for generating a conformal mesh of high quality.

The selection of an appropriate solution variable is dependent on simulation objectives. For example, cavitation prediction within a pump is most sensitive to the pressure gradient. Therefore, pressure is a logical choice for the sensor variable in this case. In advection-dominant flows, velocity magnitude is the right choice, while for turbulent mixing and convective heat transfer prediction, turbulent kinetic energy is a useful sensor variable. The Mach number is often used in transonic flows. The adaptation sensor also permits using multiple solution variables by expanding the directional gradient term.

Convergence and Control of the Mesh Adaptation Cycle

It is also possible to use more than one adaptation point cloud. For example, the current and previous mesh point clouds can be combined to smooth any cycle-to-cycle edge length chatter within the adaptation process. The entire process is computationally efficient because the mesh is refined only in the local areas. The updated CFD simulation on the freshly adapted mesh requires only a few iterations to resolve the local mesh changes. The compute time during the adaptation steps can be managed by converging sufficiently but not overly tightly during each step and saving strong convergence for the final adapted mesh.

Re-meshing to Conform to an Updated Size Field

Mesh adaptation procedures that update the mesh to conform to the updated size field have several disadvantages, including:

Utilizing a re-meshing approach during adaptation eliminates the disadvantages mentioned above. Moreover, the process becomes more “user-independent” as the Fidelity Pointwise mesh generation software creates a mesh that conforms to the updated size field using the original mesh topology, and aligns with the geometry model, meshing parameters, and CFD solver attributes. The various curve, surface, and volume meshing operations are then processed with the updated size field using the original meshing algorithms. The process is fully automated after the initial user-generated mesh, running in batch using the edge-length point cloud to drive adaptation. Note that the point cloud need not correspond to the mesh at all; in fact, it should be a completely independent set of points. The incremental computing time required to perform an automated mesh re-generation using the adaptation point cloud is well worth the price. Using the refined mesh resolves the geometry, improves the mesh quality, and the mesh style is consistent in the near-wall regions.

The simulation geometry and the flow condition consisted of a cold air jet exiting a 26mm long pipe, impinging onto a flat heated lower plate. An initial mesh for the adaptation procedure consisted of approximately 15,000 nodes. The mesh had anisotropic near-wall refinement with a near-wall distance of 0.5mm. The maximum expansion ratio of the initial mesh was 521, and the maximum aspect ratio was 28,651.

Starting from the initial mesh, a first solution was obtained, and the adaptation edge length cloud of points was computed. The mesh generator combined the initial user-defined mesh size field with the edge length point cloud to obtain the overall mesh size field. Figure 1 shows the adapted mesh after five cycles. At this point, the jet structure and flow gradients reflect in the mesh structure. The high aspect ratio mesh within the boundary layer is preserved normal to the wall but is refined parallel to the wall in some locations, as required to reduce truncation error.

After the ninth adaptation cycle, 94% of the mesh nodes were marked for adaptation. Hence, the truncation error was uniform over the whole mesh, and the adaptation cycle converged. The final adapted mesh consisted of approximately 331,000 nodes, as the right side of Figure 1 shows. As Figure 2 shows, the gradients of all flow variables were crisply resolved for this near mesh-independent prediction.

(ii.) A three-dimensional flow through an axial gas turbine rotor

The second demonstration case for the adaptation procedure is the rotor from a 1.5-stage turbine test rig. The inner and outer diameters of the turbine are 490mm and 600mm, respectively. The rotor consists of 41 blades defined by modified VKI profiles of 60mm in chord length. The tip clearance in the rotor row is 0.4mm. The turbine blades are radial with constant cross-section. The rotational speed of the turbine rotor is 3500 rev/min. For the demonstration, an operating point was chosen with a constant inlet total pressure of 169,000Pa, an inlet total temperature of 308K, and an outlet static pressure of 135,000Pa.

An initial mesh was constructed using a quad-dominant surface mesh and anisotropic elements along the leading edge and trailing edges. Fidelity Pointwise’s T-Rex meshing technique was used to generate 30 layers of hexahedral mesh elements near all walls and within the narrow tip gap between the top of the blade and the shroud. The total computational effort of adaptation is competitive for this case. All cases are run on the same hardware and 32 cores for the CFD portion of the simulation. For this test, the r.m.s. residual norms of momentum and mass equations were converged to less than 1 × 10-5 during each intermediate adaptation cycle, and finally to machine round-off for the fifth adaptation cycle.

Figure 3. After the 3rd (left) and 8th cycle (right), the adapted mesh conforms to the underlying geometry.

The final adapted mesh resolved subtle flow features, including the tip flow, the hub, and passage vortices, and the trailing edge wake, all while maintaining the near-wall mesh in the boundary layer. Mesh-independent estimates for power and efficiency are assessed using quadratic extrapolation versus the inverse of the mesh node number. Both the predicted power and efficiency on the final adapted mesh deviated by less than 0.05% from the estimated mesh-independent (infinitely fine mesh) values.

Cadence CFD and ISimQ have developed a mesh adaptation procedure that maintains geometry associativity and the underlying anisotropic boundary layer meshes resolution. The rate of adaptation of the mesh is controlled by an adaptation exponent while targeting a specified rate of increase in mesh complexity between successive adaptations. The convergence of the mesh adaptation is stopped when the truncation error becomes uniformly distributed throughout the mesh. Together, the overall adaptation procedure provides a high-quality mesh adaptation that resolves the main and subtle flow features by systematically reducing the numerical truncation error in a computationally efficient manner. Future work will further improve the adaptation mesh node and computational efficiency.

If you’d like to try Fidelity Pointwise for Robust and Accurate Mesh Adaptation for Turbomachinery Applications, request a demo today.