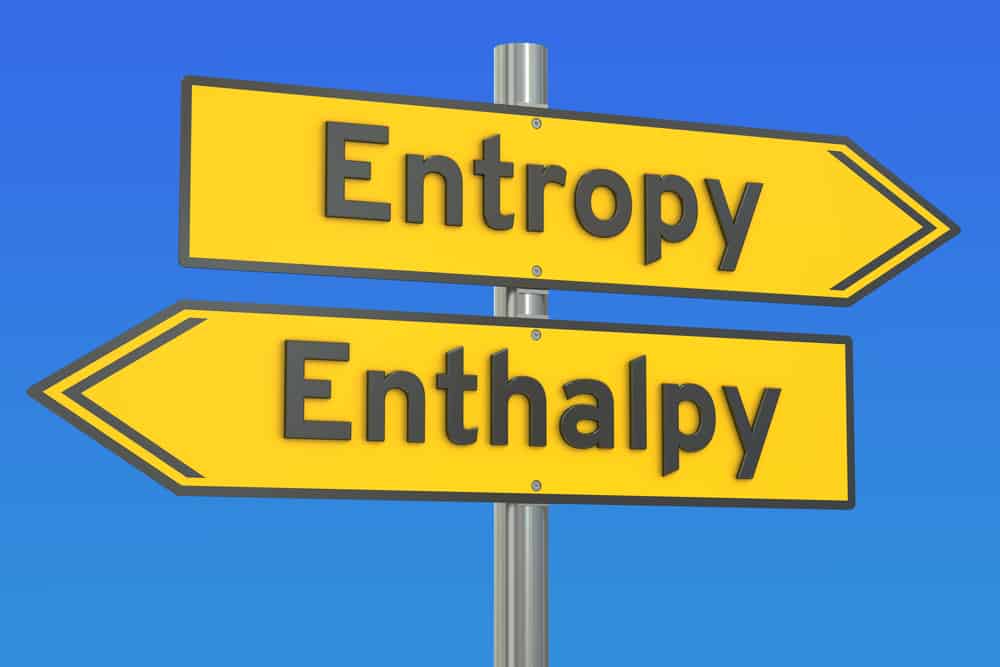 Thermodynamic energy transfer is an important concept in many fluid systems and heat exchange units. The concept of heat and work is explored while establishing their relationship to variable factors such as enthalpy and entropy. While these variables are related to heat transfer, or the variation of it, they are not to be confused with one another. While enthalpy is the total heat content within a system, entropy is the thermal energy that is not available for producing a salient result in a thermodynamic system.

Understanding both enthalpy and entropy generation is important in predicting flow characteristics and their thermal transfer mechanisms in major aerodynamic or fluid system design and optimization processes. This is further made easier with the help of computational fluid dynamic (CFD) tools, which facilitate a numerical simulation approach for enthalpy-entropy calculations in different pressure and temperature conditions. Systems designers and engineers will greatly benefit from understanding the basics of enthalpy vs. entropy, which we will explore in this article.

Comparing Enthalpy vs. Entropy in a System

Enthalpy is a core concept of thermodynamics and defines the total energy contained within a system. The addition of energy increases enthalpy and vice-versa. The total energy can be expressed as the sum of all internal energy and the amount of work done to change it. In a fluid system, enthalpy can be described as the amount of energy that a flowing fluid can transfer across a system boundary. The work associated with the flow is the product of the pressure and volume of the fluid within this system. The enthalpy can be expressed as:

H is enthalpy, U is the internal energy, p is pressure, and V is the volume of the fluid system.

Enthalpy changes are often measured to calculate the amount of heat involved and energy transferred to the environment. This can be expressed as:

Entropy is generated out of spontaneous reaction and is a measure of the disorder or randomness associated with a thermodynamic process. It can also be used to describe energy unavailable to do the work. The more energy is lost, the more randomness increases within the system, which means the entropy increases. For instance, when a block of ice melts, as more energy is expended for the ice to melt, the entropy increases.

The entropy calculation can be done in a few different ways. The most fundamental equation relating the entropy with internal energy is:

In the above equation, dS is the change in entropy, dU is the change in internal energy, T is the absolute temperature, p is pressure, and V is the volume of the system. However, for different types of reactions, entropy can be calculated in different ways.

ΔS is the change in enthalpy

ΔQ is the change in heat flow

And T  is the absolute temperature in the system

Kb is the Boltzmann's constant

And Ω is the number of microstates possible within the system

When setting up a thermodynamic simulation model, the study of properties such as the enthalpy, entropy, and heat capacity of the system can help engineers understand the detailed effects of the energy transfer phenomenon. This analysis can be made easier with the help of CFD tools such as Omnis. Omnis can run accurate simulations and enable the calculation of enthalpy change and entropy generation for all types of compressive or non-compressive forces acting in a system. The numerical analysis approach facilitates simplification of the heat exchange analysis along the flow passage for different pressure, temperature, and volume conditions.