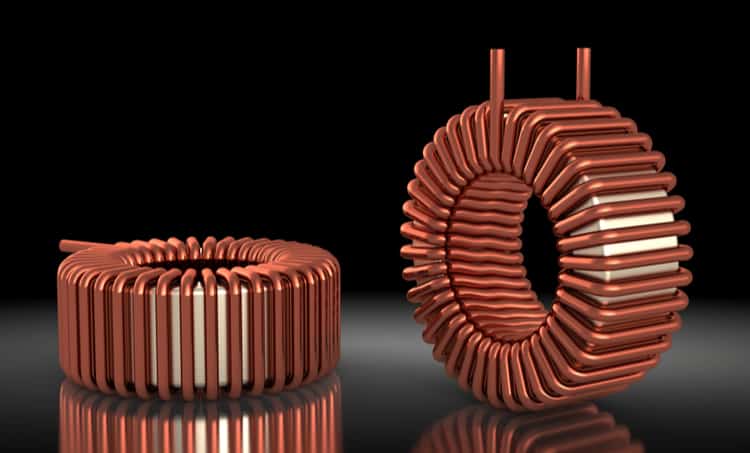 This toroidal inductor has some parasitic capacitance in the windings

As much as we would like to think every component is perfect, this is simply not the case. Every component, whether it’s a resistor or a MOSFET, has some parasitics that will dominate once the component is driven with sufficiently high frequencies. The frequency-dependent behavior of real components requires describing all components in terms of equivalent RLC models to predict electrical behavior in a real circuit.

Parasitic Capacitance of an Inductor

All inductors have three parasitics that influence AC behavior in a real system:

The equivalent model used to describe an inductor in terms of its parasitic capacitance is a parallel RLC circuit with lumped elements. We use this model because the winding capacitance is in parallel with the inductor coil, which arises due to the spacing between loops in the coil.

Resonance in a toroidal inductor coil due to its parasitic capacitance. The equivalent parallel RLC circuit and resonant frequency are shown in the image

From the above graph, we can see the self-resonance effect clearly, which produces the peak in the measured impedance data. This self-resonance peak is at ~130 MHz for this example inductor, which is typical of wirewound toroidal inductors mounted on PCBs. Above this frequency, the inductor behaves more like a capacitor, as its impedance decreases with increasing frequency. This is the inverse of what is seen in a capacitor due to its parasitic inductance, where the impedance reaches a minimum at the self-resonant frequency.

The above model is simple enough to derive an impedance equation for the inductor coil. This is shown below in terms of the parasitic elements in the above list and circuit diagram:

The impedance of a parallel RLC circuit for an inductor

The equation, self-resonant frequency,  and circuit model above collectively describe all the electrical behavior of an inductor with known parasitics. Similar models can be developed for other components with coils, namely transformers and chokes. This problem with parasitic capacitance is the reason inductors and coiled components can fail to fully suppress EMI.

As a result of parasitic capacitance, coils can fail to operate properly as filters in some important situations:

There are other instances in power electronics, RF systems, and digital electronics where the parasitic capacitance of an inductor will create noise problems. Be mindful of the inductor’s self-resonant frequency when selecting components. As an example, the impedance curves for two power inductors are shown below. We can see that the self-resonance is at approximately 300 kHz, which would limit this component’s use in a system like a high-power switching regulator.

Although parasitics and self-resonance are unwanted effects, they need to be included in a circuit simulation. Typically, if you open up a SPICE simulator and just use generic components, you won’t have any way to account for the parasitics in the above circuit model. To do this, you have three approaches:

These approaches are simple to do with circuit simulation software that integrates with PCB layout tools. Taking account of EMI problems due to coupling in real inductors is more complex and requires a 3D field solver to calculate and pinpoint EMI in your design. When you use the PCB design and analysis tools from Cadence, you’ll have everything you need to account for the parasitic capacitance of an inductor in pre-layout and post-layout simulations. You’ll have access to a field solver that integrates with your PCB layout tools and a SPICE simulator in a schematic capture program to help you design and model your inductive circuits.