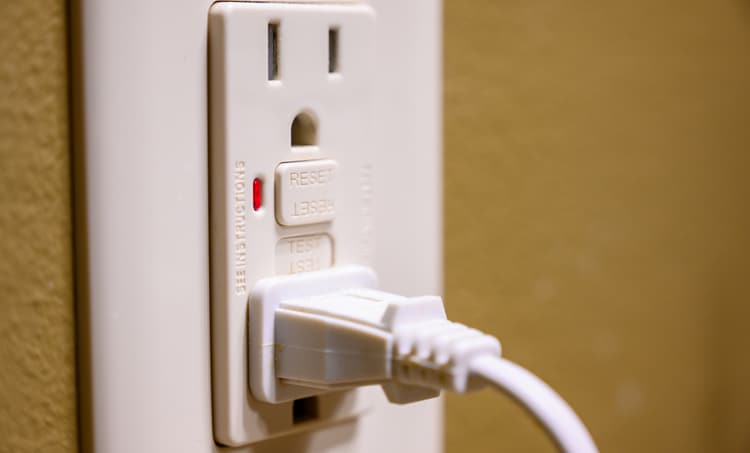 This ground fault interrupter may have been tripped by an LLLG fault.

I used to joke that you are not a real engineer until you’ve lightly shocked yourself at least three times. Accidental shocks may be just fine at low DC voltage, but they are extremely dangerous when working with high voltage/high current sources. Anytime a power source experiences a short between energized conductors and ground, serious shock can occur and the system can be destroyed.

In AC power systems, both at the home and grid levels, bridging between different wires in the system leads to different types of electrical faults. One interesting type of electrical fault in a 3-phase system is an LLLG fault (line-line-line-ground). This type of fault is among the least common, simply because all wires in the system must be bridged to create such a fault. If you are designing AC power systems, then you should take steps to prevent these types of faults.

Types of Faults in an AC Power System

For a single-phase AC power system, there is only one type of ground fault. This occurs when the live line makes contact with the neutral wire, creating a constant path directly to ground for AC power. Faults in a multiphase AC power system are divided into two types: symmetric and asymmetric. Whether a fault in a multiphase AC system is symmetric or asymmetric depends on how the different lines are connected back to earth. An asymmetric fault encompasses multiple corrections that can damage a system or create a dangerous shock for a user. The only type of symmetric fault is an LLLG fault.

An asymmetric fault, also known as an unbalanced fault, arises in 3-wire or 4-wire AC systems. An asymmetric ground fault can occur when only one or two of the phases are accidentally bridged to ground. This type of fault also refers to the case where two lines bridge with each other, but not with ground. All of the phases are affected differently when such a fault occurs. The different types of asymmetric faults are as follows:

These faults are called “asymmetric” because the phases of the bridged/grounded lines are unbalanced, leading to a large oscillating current flowing between the lines. In certain cases, symmetric faults can occur, allowing a large current to flow back to ground.

When more than 3-phases are used, a symmetric fault simply requires they all be bridged to each other or to ground. When this occurs for an AC PCB that is part of a power system, it normally occurs at the input due to some conductor bridging all the phases (LLL fault), or by bridging all the wires to a grounded conductor (LLLG fault).

What Happens During an LLLG Fault 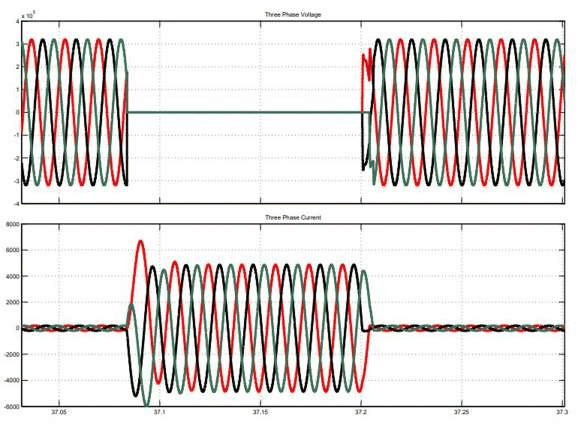 Before the fault occurs at approximately 37.08 s, the voltage and current are oscillating normally at 60 Hz. We see the supply voltage in the MV range, while the current is very low. When the fault occurs, the voltage output from the system suddenly drops to 0 V for all phases, while the current waveforms become extremely large, reaching ~5 A. This is a huge current that is capable of causing severe injury and damage to equipment.

This can also be understood in terms of Kirchhoff’s laws and Ohm’s law. Once the fault occurs, the current supplied by the AC system is diverted into the ground connection, rather than being supplied downstream into the circuit. The voltage output from the system suddenly drops to zero as measured across the load; there is no current reaching the load in the system.

Ground fault circuit interrupters are designed to create an open circuit in the event one of the above faults occurs. This can be a simple thermal expansion breaker, a relay circuit, or GFCI switch built into outlets. If there is a risk an LLLG fault will occur in your AC system, one of these should be installed so that dangerous currents can be prevented in the event of a fault.