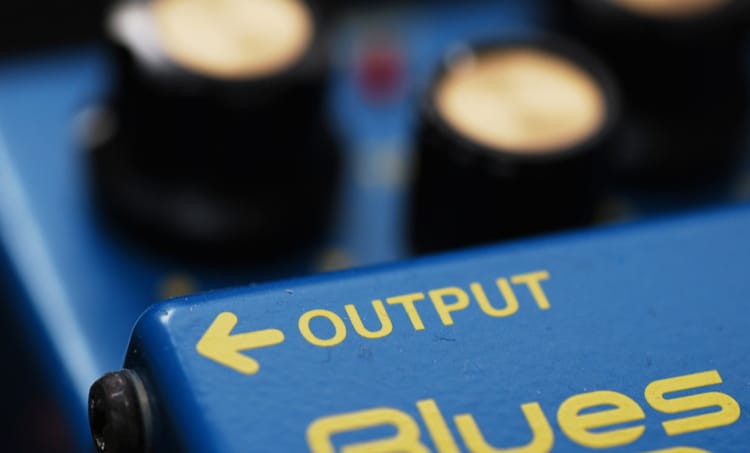 In general, there are five types of harmonic distortion that can be observed when looking at a waveform:

Aside from nonlinear distortion produced by nonlinearity, these types of harmonic distortion will only be seen on broadband signals or on signals that are sums of discrete frequencies.

These terms are sometimes used interchangeably, but they do not generally refer to the same type of distortion. Because they can appear to be similar in the time domain but totally different in the frequency domain, they are worth comparing, as they will generally be identified in a time-domain measurement:

Amplitude distortion often appears as clipping due to saturation 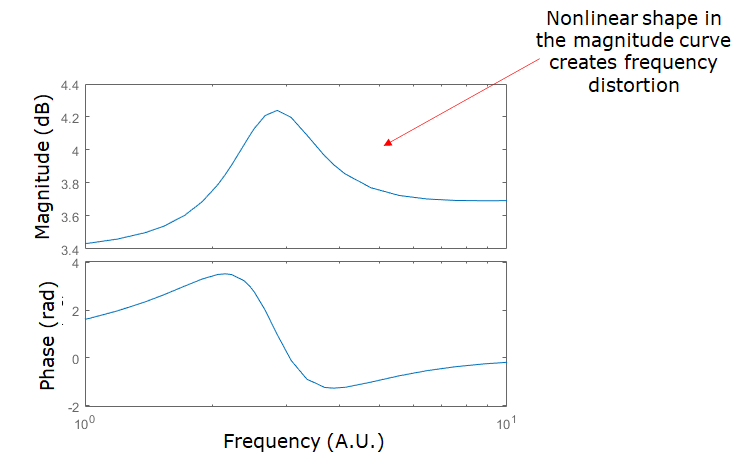 Some confusion can arise because a real component may only create amplitude distortion in a certain frequency range. This phenomenon could best be described as “nonlinear frequency distortion” and should illustrate the importance of nonlinearity in real components and circuits.

Whenever the phase of a filter’s transfer function (Bode plot) is a nonlinear function of frequency, the filter will create phase distortion. As a result, the output waveform will appear distorted, but not necessarily because the wave has experienced clipping or another amplitude effect. Instead, this occurs because the group and phase velocities will not be constant values, so different frequencies that make up the signal will propagate at different velocities. 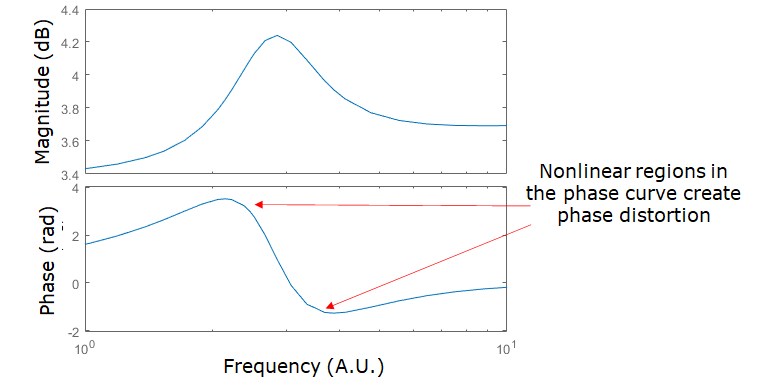 This occurs when a frequency modulated signal or other broadband signal is fed into a nonlinear component. More specifically, this is normally seen in power amplifiers when the input is near the saturation regime. When this occurs, sum/difference harmonics are generated from the sum of discrete frequencies that makes up the input signal.

The most prominent set of sum/difference harmonics are the 3rd-order intermodulation products. These are most likely to be observed in the amplifier’s linear input region, and they will appear closest to the band edges of the input signal’s power spectrum. In the time domain, intermodulation distortion appears as low-amplitude noise that is slightly higher frequency than the input signal’s carrier frequency.

A signal can experience crossover distortion in push-pull transistor amplifiers, particularly in amplifiers that use BJTs. When this occurs, the output signal briefly drops to zero when one of the transistors in the pair enters the cutoff region. In effect, there is a brief time while the input signal is at a low level where neither transistor in the amplifier is turned on, so the output is zero even though the input is not zero. A simple example in the time domain is shown below.

Crossover distortion in a push-pull (Class B) amplifier

How to Spot Harmonic Distortion

In general, it’s easy to spot any of the above types of harmonic distortion in a measurement or simulation: just compare input and output signals at the component or circuit of interest. If the two aren’t a linear function of each other in the time domain and the frequency domain, then there is some distortion. During the design phase, make sure to use simulation tools if you suspect harmonic distortion will be a problem in your circuits.

When you need to design systems of real components with low distortion, use the set of system analysis tools from Cadence. Designers can use these tools to spot types of harmonic distortion in their signals and take steps to eliminate them. The PSpice simulation application can be used to generate the simulations required to identify and optimize circuits for low harmonic distortion as well as simulate real circuits with a built-in modeling application.