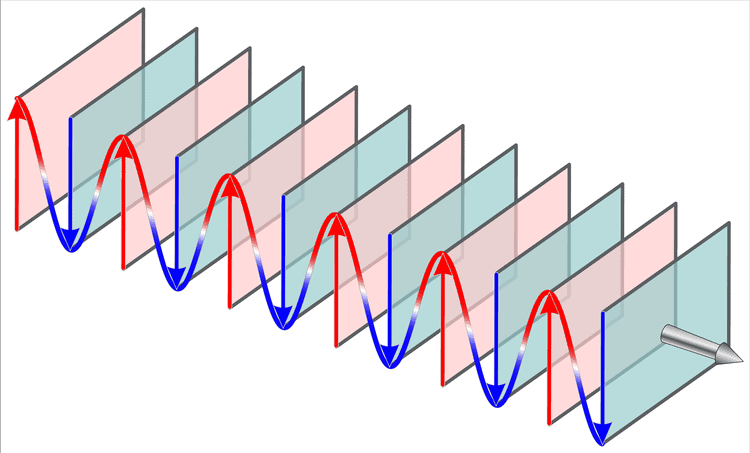 When a plane electromagnetic wave travels in free space, its speed is equal to the speed of light

Electromagnetic waves are composed of both electric (E) and magnetic (B) fields. When waves possess E and B fields of the same magnitude and phase in planes perpendicular to the direction of propagation, they can be called uniform plane waves.

When a plane electromagnetic wave travels in free space, its speed is equal to the speed of light. However, not only the speed changes when it interfaces two mediums while in propagation; the complete behavior of the plane wave changes. When the traveling wave encounters two different mediums, it may either get partly reflected or transmitted, depending on the characteristics of the mediums. The normal incidence of a plane wave at an interface between perfectly dielectric and perfectly conducting mediums generates standing waves in the dielectric medium.

The Normal Incidence of a Plane Wave at the Media Boundary

, respectively. Medium 1 is a perfect dielectric,

and medium 2 is a perfect conductor,

. In this case of an incident plane wave, the reflection coefficient

and transmission coefficient (T) are as follows: 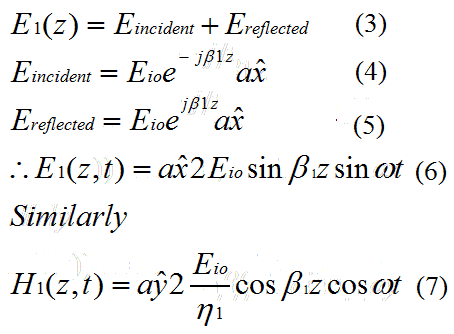 Standing Waves in the Dielectric Medium

From equations (6) and (7), we can see that the electric field and magnetic field vector of the standing wave vary sinusoidally, with distance measured from z=0. In the standing wave, E is maximum when H is zero. E and H are 90 degrees out of phase with each other in both time and space.