Fans of personalized services might daydream of a dedicated transmission line that goes directly from the local generating station to their household. Unfortunately, that daydream is not economically viable, and would cause frequent power issues when the connected load varies. Transmission systems are interconnected in order to supply reliable power to a diverse range of loads at the lowest energy price possible. Interconnections make the transmission grid very complex and subsequently diminish the ride-through capacity of the power system—resulting in system failures and instabilities.

The introduction of Flexible Alternating Current Transmission Systems (FACTS) has alleviated the instabilities experienced in the interconnected transmission sector. FACTS controllers help resolve the thermal, dielectric, and stability issues of the transmission lines by controlling grid parameters such as impedance, voltage, and phase angle.  FACTS  controllers are power-electronic systems that are connected to transmission lines—either in series or parallel—to control the power flow in the grid.

The Distributed Power Flow Controller (DPFC) is the advanced version of the Unified Power Flow Controller(UPFC). The UPFC is one type of combined series-shunt FACTS controller which injects current into the grid with the aid of a shunt converter, while the series converter supplies voltage in series with the grid voltage. Both the shunt and series converters are connected to each other via a common DC link. The DPFC is a UPFC without a common DC link. By eliminating the power link present in a UPFC, independent control of series and shunt converters are enabled in a DPFC.

How the DPFC and the UPFC Are Related 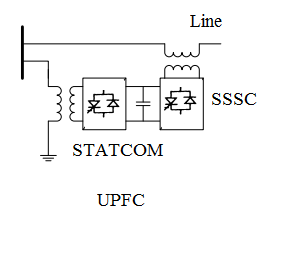 The schematic diagram of a UPFC shows the STATCOM and the SSSC connected to the transmission line.

In the schematic diagram of a UPFC shown above, the STATCOM and the SSSC share a common DC link, permitting bi-directional power flow between its AC output terminals. In the UPFC, the real and reactive power compensation is realized without incorporating an external electrical source. With proper control techniques, the UPFC allows the control of grid parameters such as impedance, voltage, phase angle.

The schematic diagram of a DPFC shows a shunt converter and a number of series converters connected to the transmission line.

Replacing the word “unified” with “distributed” is to acknowledge the distribution of series converters and the removal of the common DC link from the UPFC. According to Distributed-FACTS (D-FACTS) concepts, the multiple series converters—collectively called Distributed Static Series Converters (DSSC)—offer redundancy in the DPFC topology and improve reliability. The STATCOM and DSSCs in a DPFC are independently controlled to meet the power requirements in the grid.

Even though the DPFC is derived from the UPFC, the DSSCs and elimination of DC links make them less susceptible to failure. The DPFC exhibits the same functionality of a UPFC, with a reduction in the footprint area. As the controls are not coordinated, it reduces the complexity of the shunt and series converter control. The DPFC is excellent in maintaining the voltage and angular stability within a power transmission network.

Working Principle of the DPFC

In the DPFC schematic, it is clear that the back-to-back connection between the STATCOM and DSSCs are eliminated. This means the transmission line is the only connecting link between the shunt and series converters. The power exchange between the shunt and series converters in a DPFC is through the AC terminals of the converters via the grid at 3rd harmonic frequency.  The power theory of non-sinusoidal components is the basic working principle of the DPFC technology.

where Vn and In gives the RMS value of the nth harmonic voltage and current.

is the phase angle between Vn and In.

Looking at equation 1, it is clear that the active power at any nth harmonic frequency is independent of voltages and currents at other frequencies. This principle is employed in the DPFC technology for the free exchange of power between the FACTS controller and the grid. The converters in a DPFC are controlled in such a manner that they generate active power at one frequency without any electrical power source, and absorb the same power at other frequencies.

Due to the advantages of reduction in materials, transmission losses, capital cost, and improved transmission efficiency, the transmission of electric power is always carried out in a three-phase configuration. The active power exchange in a DPFC  utilizes the 3rd harmonic frequency due to its identical nature in all the three phases. The triplen harmonics presented in each phase of a three-phase transmission line are zero-sequence components. The 3rd harmonics are selected for the DPFC  operation, as it is the lowest harmonic frequency with zero-sequence symmetrical characteristics.

The DPFC is a great choice if you are looking to decrease the gap between the demand and supply of electric power in the power system. Power transfer capability improved with the introduction of the DPFC into the grid. The DSSCs in a DPFC rule out the need for high-voltage isolation when compared to a UPFC. The multiple series converters are of lower MVA (the Breaking / Making Capacity and Voltage Rating) rating compared to the single series converter, comparatively reducing the cost of a DPFC. The other advantages of the DPFC include high controllability and improved reliability.

The DPFC allows control of grid parameters including grid impedance, transmission angle, and grid voltage. The shunt and series converters can be optimally placed in the grid length since there is no common coupling between the two. The DPFC can mitigate power quality problems such as sags, swells, and flickers, improving the power system stability.

In all, improving reliability of power is a key component to the optimization of your electronics design. And understanding the potential of DPFCs will improve your capacity to introduce more nuanced and unique opportunities in your designs.