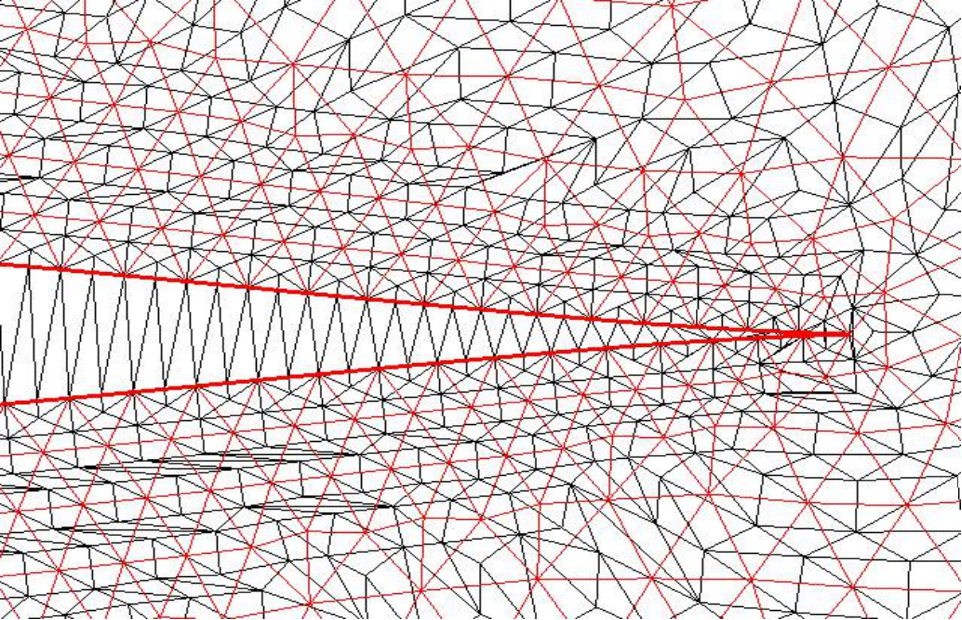 The overset or chimera grid methodology utilizes a set of overlapping grids to discretize the solution domain. The component grids may be fitted without regard to other portions of the geometry and can simplify the grid generation process to a great extent. The result is a flexible computational simulation framework that can be an enabling force in many situations. It has been widely used to simplify the structured grid generation requirements for complex geometries. Using an overset grid system is also a promising solution for the simulation of bodies in relative motion, such as a fuel tank being dropped from an aircraft, and rotorcraft.

A primal grid consists of grid points, where the cell connectivity between those grid points are as produced by the grid generation software. The set of cell types will typically be tetrahedra, hexahedra, prisms, and pyramids.

A dual grid consists of cell centers of the primal grid and connectivity of those dual-grid points to form dual cells. The dual-grid cell connectivity must be defined, as we are provided with only the primal grid cell connectivity. The type of dual-grid cells constructed will significantly impact the scheme used for interpolation. A disadvantage of the weights computed using the least squares procedure is that the weights are not bounded between zero and one. A dual grid for unstructured grids will provide the same benefits as those for a structured grid but at the cost of more memory and time.

For a structured grid, the connectivity between the cell-centered locations is implicit in the same way as for the points/nodes. As the dual grid connects cell centers, they will not cover the same volume as the nodal or primal grid. The dual-grid cells do not cover the space between the boundary cell centers and the grid boundary. Hence, a donor in the dual grid must use extrapolation for any fringe located in the void between the boundary cell centers and the block boundary face. The dual grid can be extended across point-match block-to-block interfaces if the connection is regular and topologically consistent.

Figure 1 shows an unstructured primal grid composed of triangles (black lines) and the cell centers shown as blue dots. One possible dual grid with triangles is shown in light blue, which connects the cell centers. The unstructured simplex dual-grid cell in three dimensions will be tetrahedra. Clearly, multiple dual-grid triangles are required to cover the primal triangles. Thus, a donor search in the primal grid must be augmented by a donor search in the dual grid to find the correct dual donor cell. 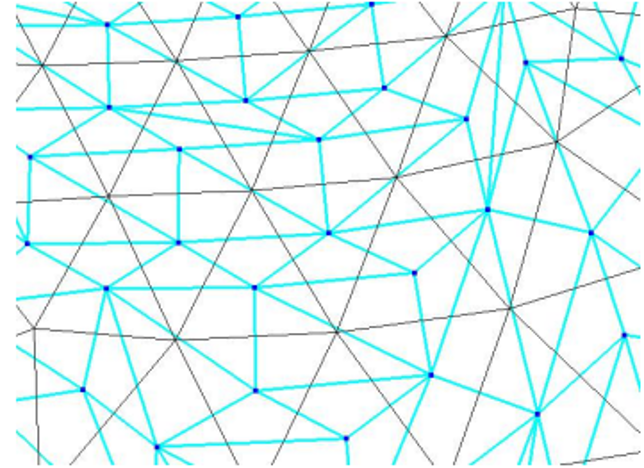 The donor search within the Suggar++ software will initially operate on the primal grid even if a dual-grid donor is requested. The primal grid donor cell is used as one corner of the dual-grid donor hexahedron, and the procedures try to use appropriate neighbors to form the remaining corners of the hexahedron. As the dual grid connects the cell centers, note that if a fringe falls in the volume between the cell center and a boundary face, the fringe location will be outside the dual-grid donor, and extrapolation will occur.

As discussed earlier, the dual grid will not cover the same volume as the nodal or primal grid and leaves a void near the boundaries. A fringe point located in this void will find a primal-grid donor, but the dual-grid donor will require extrapolation, possibly resulting in non-monotonic interpolation with the interpolated value not bounded by the donor member values.

Monotonic interpolation can be retained if the user accepts a reduction in the accuracy of the interpolation in the boundary normal direction. The dual-grid donor members can be reduced to a quadrilateral, but when there is no single normal direction to the boundary, the reduction procedure will reduce the donor cells to a single donor member: the primal cell. A similar reduction process is used for the unstructured dual grid, where the donor will be automatically degraded to a triangle, line, and point when the fringe point lies near a boundary face and is outside the dual tetrahedral grid.

A cell-centered dual-grid donor can provide significant benefits relative to the default cell-centered donor. As mentioned, the donor members for the default cell-centered donor are the donor cell and its neighbors, with the donor weights computed using a least-squares procedure. These least-squares weights may not be bounded by zero and one and may result in non-monotonic interpolation. In addition, the interpolated value may not be continuous as the fringe location moves from one donor cell into a neighboring cell, as the donor members will change. In contrast, the dual-grid donor uses an interpolation cell connecting the cell centers in the region of the primal cell.

Two geometries were chosen for simulation in RavenCFD to assess the dual-grid capability in Suggar++. The first is the hypersonic HIFiRE-1 cone/cylinder/flare geometry, and the second is the NASA Common Research Missile. These geometries were chosen because of the existence of experimental data for comparison and to assess a range of flow regimes.

The HIFiRE-1 is a hypersonic cone/cylinder/flare geometry assessed by the hypersonic international flight research and experimentation (HIFiRE-1) flight-test program. In the current work, the Mach 7.16 case with a wall temperature of 300 K was chosen for RavenCFD simulations, which were conducted in three forms to evaluate the dual-grid donor approach.

In these cases, the interpolation region was pushed very close to the HIFiRE-1 body to ensure that the interpolation occurred in regions of high gradients. Figure 3 is a slice along the y-axis, which shows the behavior of wall heat transfer on the HIFiRE-1 geometry surface and the bulk flow behavior in the region of the flare for simulation using least squares weighting with interpolation function clipping.

The dual grid requires significantly more memory, but the overall donor search wall clock times show a minimal difference in this case. As mentioned before, the least-squares procedure has a serious disadvantage in that the weights may not be bounded between zero and one. Thus, the interpolation can be non-monotonic and introduce new extrema into the solution causing difficulties for the flow solver. This behavior was exemplified in simulating the HIFiRE-1 geometry in RavenCFD. 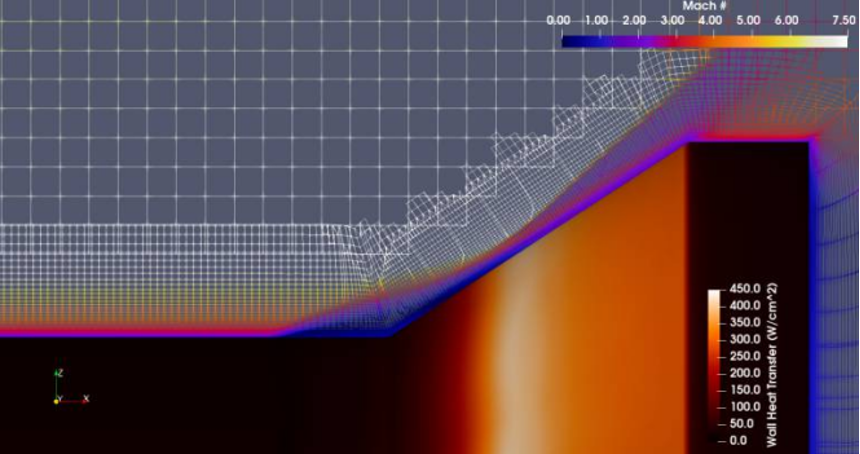 For the CRM geometry, three simulations were conducted:

In this case as well, the overset grid boundary was forced very close to the CRM, so overset interpolation took place in regions of high gradients for this work. Figure 4 shows the CRM grid (black) cut close to the body on multiple levels of increasingly coarse Cartesian background grids as the distance from the missile body increases.

As expected, memory usage is greater for the dual grid, as is the donor search time. The increased difference in donor search time between the least squares and dual-grid donor search algorithms compared to the HIFiRE-1 case can be attributed to the increased number of component grids for the CRM case. The multiple levels of background Cartesian refinement require Suggar++  to search multiple overlapping grids for suitable donors. 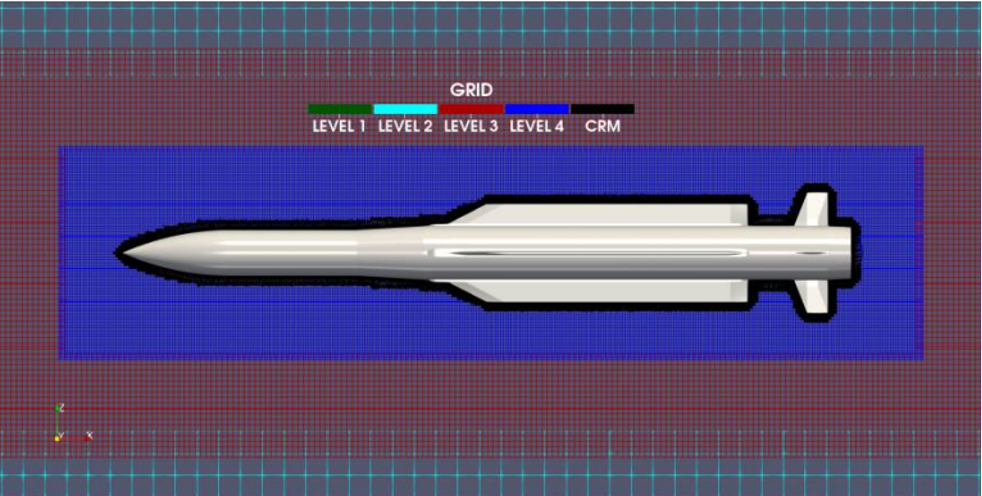 If you’d like to try Fidelity Pointwise on your CFD applications to see the benefit of Dual-Grid Interpolation for Cell-Centered Overset Grid Systems, request a demo today.