Abstract: Using Fidelity™ Pointwise®, four types of CFD meshes (multi-block structured, unstructured tetrahedral, unstructured hybrid, and hybrid overset) were generated for the NASA High Lift Common Research Model (HL-CRM). From geometry processing through the generation of the final volume meshes, lessons learned during this experience are documented. All meshes served as a baseline to build a mesh family for a mesh sensitivity study for the 3rd AIAA High Lift Prediction Workshop and in the 1st AIAA Geometry and Mesh Generation Workshop. 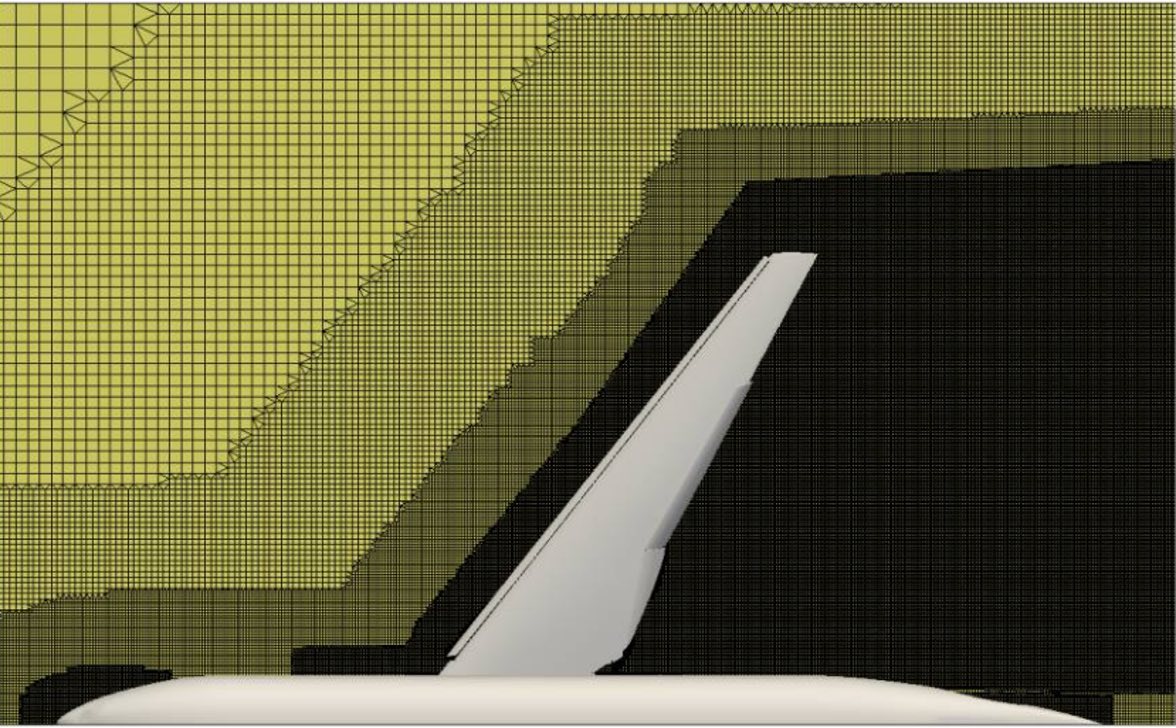 The High Lift Common Research Model (HL-CRM) geometry was used for the mesh convergence study in the 3rd High Lift Prediction Workshop (HLPW) and served as the case study for the 1st GMGW. The focus of the 1st GMGW was to identify and document the technology, software, and best practices for geometry processing and mesh generation of the HL-CRM. As part of this effort, a baseline set of medium meshes of different element types were generated as candidate meshes for the workshop.

The HL-CRM configuration studied in both workshops is based on the model of a high-speed configuration used in numerous experimental and numerical simulations. The high lift configuration originally contained a pylon, nacelle, inboard, outboard leading-edge slats, and inboard and outboard single-slotted flaps.

Figure 1. HL-CRM wing-body configuration with modifications to the leading-edge slat, a wing under the slat surface, and an inboard/outboard flap gap.

Geometry processing was performed on an Initial Graphics Exchange Specification (IGES) file provided by the HLPW. The Fidelity Pointwise mesh generation software was used to import the IGES file. The geometry was reviewed to determine if a watertight solid model could be built with modest tolerance between the adjacent surface edges. Solid models of the wing-body, leading-edge slat, and inboard/outboard flaps were constructed using Fidelity Pointwise with an edge tolerance of 0.014.

The surfaces within each solid model were assembled into quilts based on regions where additional surface meshing control was required and/or where hard feature edges existed. When the solid models were meshed further downstream in the process, a single surface mesh was created on each quilt instead of on each original surface. In Figure 2, an illustration shows the HL-CRM surfaces before and after quilt assembly.

Figure 2. The HL-CRM geometry is shaded to represent the surface mesh topology defined on the geometry level before (left) and after (right) quilt assembly.

This study aimed to create baseline structured multi-block, unstructured, hybrid, and hybrid overset medium meshes based on the gridding guidelines provided by the HLPW and supplement those guidelines with current best practices.

The far-field surface mesh location was specified to be 100 CREF from the body. Surface cell sizes near the body, nose, and tail were requested to be approximately 1.0% CREF. The chordwise spacing at the leading and trailing edges was set to be approximately 0.1% of the local device chord measured for each element (slat, wing, and flaps). Spanwise spacing at the root and tips were requested to be 0.1% of the semi-span. Finally, the number of cells/points across the trailing edge was set based on the generated mesh level.

In the volume, meshes were recommended to have at least two layers of constant cell spacing normal to the viscous walls and to use scaled stretch ratios in the boundary layer region across mesh family levels without exceeding a value of 1.25. Additional recommendations for the volume mesh included providing extra refinement in the wake regions (with flow-aligned cells, if possible). The region behind the slat and the main wing element was of special interest because of the potential for interaction between the boundary layer and the convection and diffusion of wakes from upstream elements.

B. Unstructured and Hybrid Mesh Generation

The creation of an initial triangular surface mesh on the processed geometry was performed using an automated tool within Fidelity Pointwise based on an average equilateral edge length. Modifications were made to spanwise spacings at the root and tip, as well as chordwise spacings at the leading and trailing edges of each element, to comply with the gridding guidelines discussed in the previous section.

Different techniques were used in the gaps to improve point and cell matching depending on the situation. The initial treatment of the surface meshes involved growing anisotropic triangles off the LE of each element with the chordwise spacing specified in the gridding guidelines.

Figure 3. Two views of the hybrid mesh about the flap are shown at constant Y cuts for the medium HL-CRM mesh.

Once the surface mesh modifications were complete, the T-Rex meshing algorithm was used to generate layers of tetrahedra from the completed surface mesh based on several key parameters for the medium-level mesh. The second type of medium mesh was created by combining anisotropic tetrahedra in the boundary layer with prisms to produce a hybrid mesh containing prisms, pyramids, and tetrahedra. 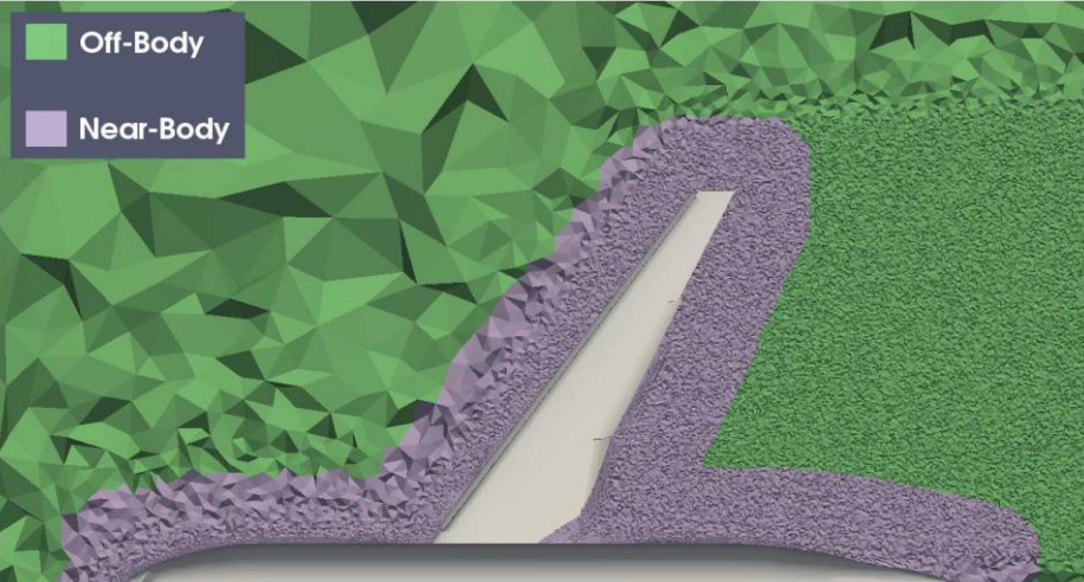 Figure 4. Near-body and off-body regions within the hybrid unstructured mesh.

An appropriate overset interpolation stencil between the near-body hybrid mesh and the off-body voxel mesh was achieved by prescribing the boundary faces of the near-body mesh as adaptation input to the hierarchical meshing process. An optional post-processing step converted the hanging-node hierarchical mesh into a fully connected unstructured mesh of tetrahedron, pyramid, and hexahedron elements for use with general unstructured mesh flow solvers.

Overset grid assembly cuts away the portion of the off-body mesh inside the model and computes the stencil for interpolation between meshes. Overset grid assembly for the HL-CRM model was conducted within the Fidelity Pointwise application through integration with Suggar++, a general-purpose overset grid assembly software package. The direct cut approach to hole cutting and overlap minimization capabilities of Suggar++ significantly reduce user interaction in the assembly process.

For the creation of the structured multi-block mesh, the geometry model was imported into Fidelity Pointwise and meshed by a procedure different than previously described. On import, the trimmed surfaces in the CAD were promoted to quilt entities within Fidelity Pointwise. While generating mesh curves for the topology in the medium structured mesh, multiple mesh curves were produced along a single surface edge instead of one mesh curve.

The geometry had several features that were challenging for a structured grid from a topological standpoint. The use of creative mesh topology resolves these difficult features properly. However, local clustering requirements and producing a smooth mesh required care in shaping the topology and distributing the mesh curves. The proximity of both the flaps and slat to the wing and their local geometric shapes introduced their challenges in creating reasonable orthogonal topologies that also allowed control of the local wall clustering. The curvature of the pressure side of the slat also warranted special treatment with a local O-H style of topology, as Figure 5 shows. 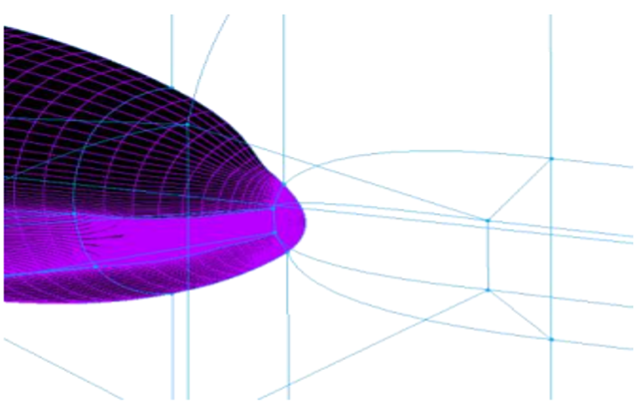 Figure 5. An O-H style topology was created at the fuselage nose and propagated to the far-field.

One final area to cover is the volume meshes. Maintaining the mesh requirements, particularly wall spacing, while also managing overall cell and point count introduced some point distribution issues on the interior of volume meshes. In general, it produced good orthogonal mesh quality. However, distribution changes from one side to another of a volume mesh while maintaining the guideline medium-mesh wall spacing caused some cells in the near-wall layer to skew. Where necessary, skewed cells were improved with just a few iterations in the elliptic PDE solver with a Steger-Sorenson boundary control function used to control orthogonality and spacing at the wall.

A set of medium baseline meshes has been generated for consideration in the 3rd High Lift Prediction Workshop and the 1st Geometry and Mesh Generation Workshop. During the mesh generation process for each type of mesh, the gridding guidelines for the HLPW were applied and then evaluated to determine if they could all be followed and if additional guidelines were necessary or if mesh type affected adherence to certain guidelines.

For the development of the unstructured, hybrid, and hybrid overset meshes, it was determined that the specification of the number of points across the trailing edges of the mesh as well as the spacings required in the chordwise and spanwise directions produced a surface mesh with undesirably high area ratios. From meshing experience, high area ratios in unstructured and hybrid meshes can lead to high volume ratios and volume cell skewness. In the case of the structured multi-block mesh, the primary focus was on the accurate representation of the geometry and adherence to the medium-level mesh wall spacing requirement.

If you’d like to try Fidelity Pointwise for different types of meshing on your CFD applications, request a demo today.