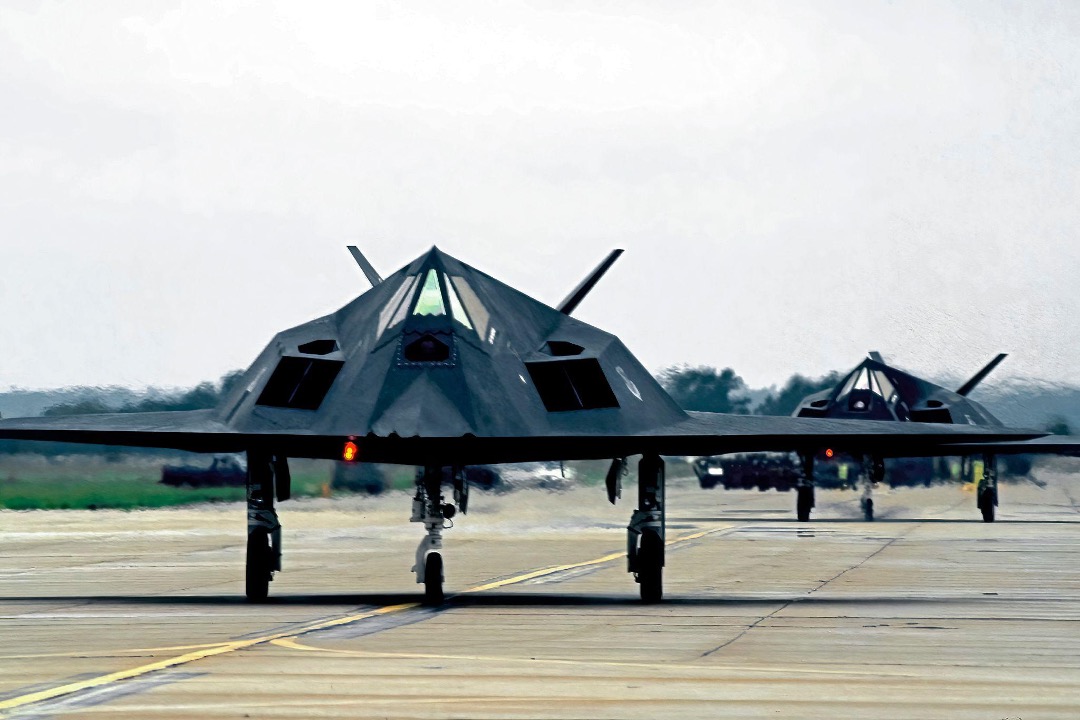 Have you ever wondered how a stealth aircraft gets its stealth capabilities and invisibility to radar? The answer is in its radar cross-section. The fuselage of aircraft and their wings are precisely engineered to have minimal RCS so that they produce minimal scattering of electromagnetic signals from radar antenna arrays. By minimizing backscattering towards a radar station, an aircraft can essentially appear invisible to a long-range or short-range radar system.

The result is some very interesting and odd-looking structural designs used in stealth aircraft, just like the US F-117 Nighthawk shown above. These structural designs do not necessarily appear aerodynamic just by looking at the structure of the fuselage so it is worth investigating how RCS reduction techniques affect the aerodynamic characteristics of stealth aircraft. We’ll provide a broad overview that compares RCS reduction with aerodynamic performance metrics in this article.

What is Radar Cross Section?

All objects that interact with a radar pulse have a property known as radar cross section (RCS). In general, when an object has a smaller RCS value, the object will be more difficult to detect.

This is the essential function of the body of stealth aircraft. The aircraft’s shape redirects the incoming pulse so that it is scattered in all directions around the aircraft, rather than being scattered right back to the radar system. If the body of the aircraft reflects enough power away from the area in which the radar is measuring for echoes, then the echo will be minimal and may be too low for the system to detect. This is one reason there are bistatic radars, where the radar detector is not co-located with the receiver and it can detect radar pulse echoes along different directions.

The RCS is only clearly defined for specific shapes that are not used in real aircraft, such as cylinders and spheres. However, if the RCS value is known, the power collected by the radar can be calculated. One can estimate the received power along a particular direction using the monostatic radar equation: 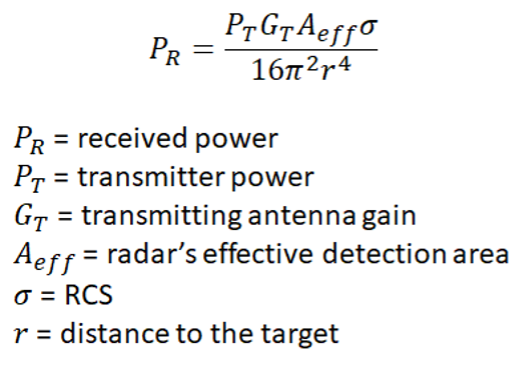 Power received by a radar system in terms of the radar parameters and the target’s radar cross section.

In the long-distance limit, where the distance between the target and the radar is much larger than the size of the target, the RCS approaches the value listed below. The following approximation arises because, in the limit of long distances, the target object that reflects an incident radar pulse acts like a point source.

RCS in the long-distance limit.

From this pair of equations, we see that if the RCS value is low, then the received power will also be low. If the received power is below the receiver’s sensitivity threshold, then the echo will not be detectable above the system’s noise floor. For a detector to overcome low RCS values, the simplest solutions are for the radar system to have higher antenna gain (or array gain for phased array radars), higher receiver sensitivity, or larger effective area for detecting echoes.

The aerodynamic metrics typically used to define the performance of an aircraft include lift, drag, top speed, and weight. The shape of the aircraft will have the greatest influence on RCS, and low-RCS structures can be very complex with sub-optimal aerodynamics. Designers must try to balance the low-RCS requirement with the need for aerodynamic performance when optimizing aircraft.

When RCS can’t be further reduced through structural optimization, there are additional methods used to reduce RCS without greatly hindering aerodynamic performance. These include:

Radar systems designers can balance low RCS structural optimization with aerodynamics requirements using the complete set of system analysis tools from Cadence. Only Cadence offers a comprehensive set of circuit, IC, and PCB design tools for any application and any level of complexity. For system-level simulation, users can use best-in-class electromagnetics simulations and CFD simulations to evaluate system functionality.