Among the various approaches in two-port modeling, the two-port impedance (Z) model reproduces the system behavior by exciting the model with currents. As illustrated in Figure.1, the model is excited by supplying input port and output port with currents  I1and  I2, respectively. The responses to the excitation are obtained as the input port and output port voltages V1 and  V2, respectively. The input-output behavior of a large complex system can be easily characterized using the four variablesV1,V2, I1, and I2, and mathematically represented using the excitation-response variables and coefficients, called Z- parameters.

Any linear circuit can be represented as a two-port network, defined by four variables V1,V2, I1, and I2. The direction of currents and polarity of voltages in port 1 and 2 are as shown in Figure.1 Out of these four quantities, the input quantities are independent variables, and the outputs are dependent variables.

The Z-parameters denoted by Z11, Z12,Z21, and Z22 are the coefficients of the currents I1, and I2, in the two equations above. As each Z-parameter gives the voltage-current relationship, the coefficients are impedance values given in ohms. The equations (1) and (2) can be electrically represented by the equivalent circuit given in Figure.2: 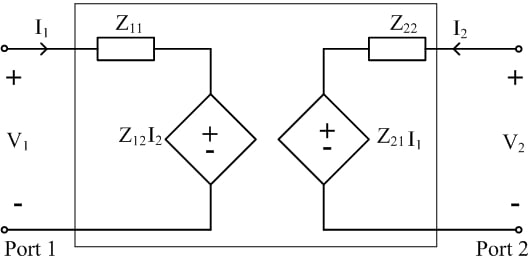 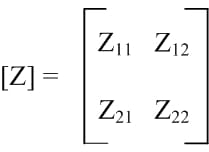 Now you know that the Z-parameter matrix describes the voltage-current relationship in a two-port impedance network. But how would you calculate the Z-parameters of a given large complex circuit? Unless the knowledge about the internal connections of the circuit under test is limited, circuit analysis is the best method. If the circuit on your workbench is a ‘black box’, then you need to go through the following steps to determine each of the Z-parameters. (Refer to Figure.1):