What You Can Takeaway 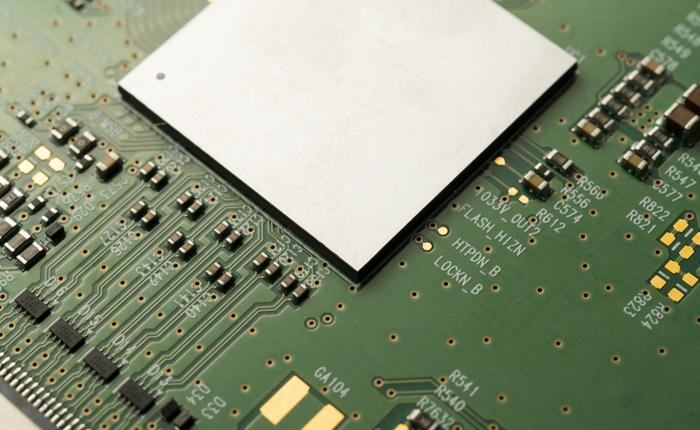 Telecommunication equipment, RF boards for networking, boards for high speed processors, and many other systems have strict requirements on crosstalk intensity. The maximum crosstalk intensity is not always specified in a signalling standard, and it is not always obvious where crosstalk will be most intense in your design. As much as you might try to properly floor-plan your design, you may find that your layout and routing creates strong crosstalk from an aggressor trace.

So where can you find crosstalk in your design, and what is the easiest way to identify offending traces in your PCB? You could use a full-wave field solver, but there are easier analysis features you can use in your PCB design software to identify and suppress crosstalk. The best post-layout simulation tools for PCB design and layout will use a field solver with a reduced numerical algorithm to calculate crosstalk between nearby traces, giving you a quick way to spot crosstalk in your design.

The post-layout simulation features in Allegro are ideal for simulating signal behavior in your board, either before or after you finish your PCB layout. These features can be accessed within Allegro and take data directly from your layout; you won’t have to reconstruct your board in a separate simulation program. Here’s how you can access and use these features to analyze signal behavior and crosstalk within your design. Where to Find Crosstalk in Your Design

Crosstalk couples between signal nets in two ways, depending on the dominant type of parasitics that exist between two or more traces:

Inductive and capacitive crosstalk depend on the mutual inductance and mutual capacitance between two traces, respectively. These terms are determined entirely by the magnetic and electrostatic interactions between different conductors, as well as how these conductors are arranged in space. What this means is that you need to analyze crosstalk in a post-layout simulation; you can’t do anything to spot crosstalk from your schematics.

Spotting both types of crosstalk requires some unique analysis steps. You can try to quantify the different types of crosstalk with an analytical equation of the crosstalk coefficient, which will tell you the fraction of the aggressor signal level induced on the victim net. However, these will inevitably be approximations as the geometry in a real PCB layout can get very complicated, making the mutual inductance and mutual capacitance difficult to determine exactly. The better option is to use a post-layout simulation tool directly from your PCB design program.

Tools for Identifying Crosstalk in a PCB Layout

Once you’ve completed your PCB layout, you can take steps to try and identify nets that may experience large amounts of crosstalk. Because of the complicated geometry in any PCB, there are multiple parasitics on any given net, and you may see strong crosstalk even though you followed basic trace width and separation rules. In a dense board with hundreds of nets, you don’t need to simulate crosstalk between every trace. Instead, you only need to select critical nets as victim traces and look at nearby nets that may act as aggressor traces.

To do this in Allegro, you want to use two important simulation tools to analyze crosstalk:

The coupling analysis tool can be accessed from the Signal Integrity program in Allegro. When this tool is run, the user selects nets to be analyzed. Once the results are calculated, they can be viewed in a table format and in a visual format within your layout. The coupling length and strength between a victim net and its aggressor net can be seen in your layout as a heat map, allowing you to pinpoint which nets need to be corrected.

In the image below, the net N22287555 has the strongest coupling with VDDS, which indicates noise in the digital power plane can easily couple into this net. The net USB0_ID has strong coupling to net N22155575. These two nets are on different layers, but they are not separated by a ground plane. This should illustrate the effects of placing ground planes between signals on different layers; it reduces the strength of potentially coupled signals. The specific region where high coupling is present can be identified visually using the heat map, which shows you which region of your routing may need to be adjusted to suppress crosstalk. 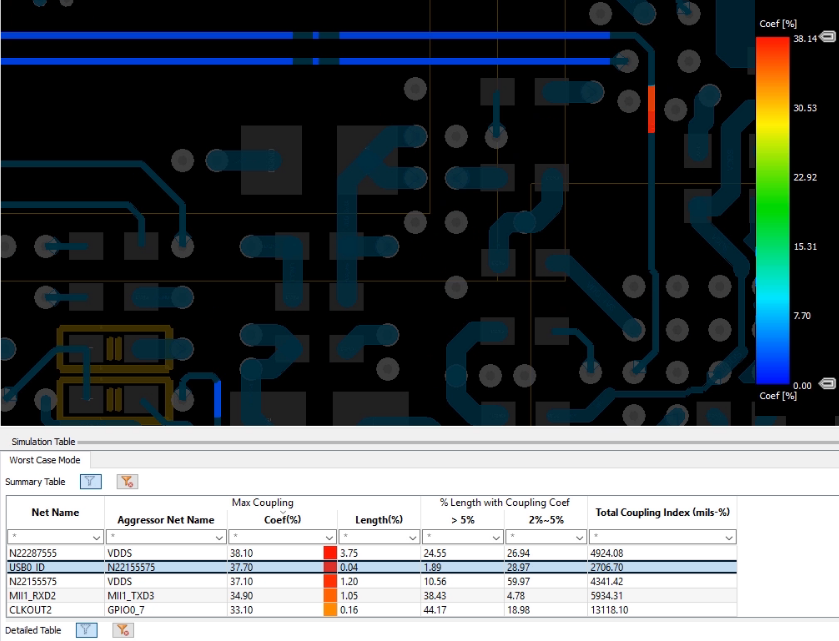 Coupling analysis allows you to identify which nets may exhibit strong coupling, while crosstalk analysis shows you the strength of any coupled signal. The same tools in Allegro that run coupling analysis also run crosstalk analysis. Simply run the tool from the Signal Integrity program and select the nets you want to analyze. The tool will return graphical and tabular results showing the coupled signal strength between the various nets you selected. Note that this analysis will show you the coupling region and the coupling coefficient, just as was done in coupling analysis. 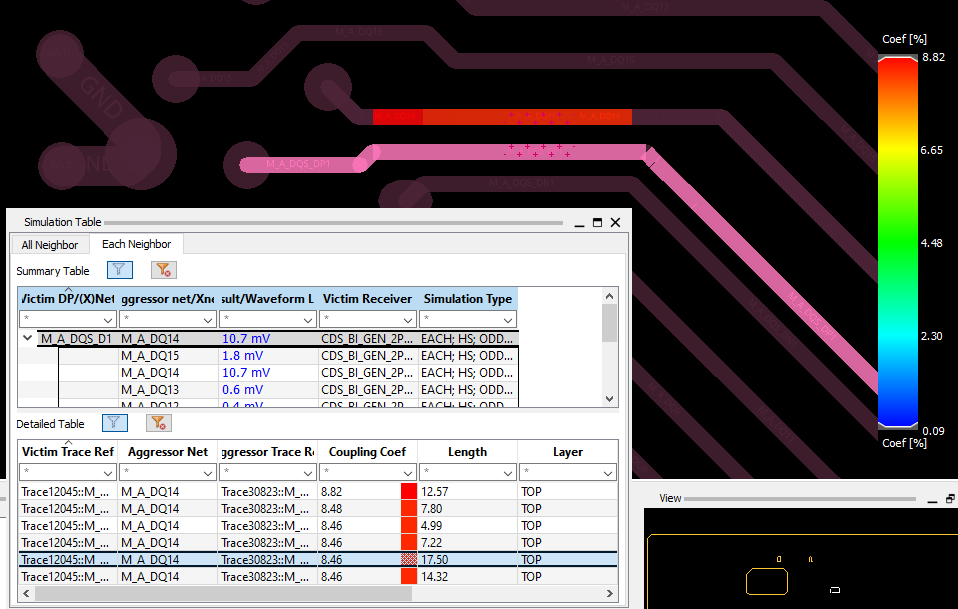 Allegro analysis results directly from a PCB layout. The heat map shows exactly where crosstalk is introduced, and the table shows the induced signal strength in this region.

Once you’ve identified nets that are susceptible to crosstalk, you need to separate victim and aggressor traces or provide greater isolation between them. You can never totally eliminate crosstalk, but you can reduce it to the point where it does not cause unintended switching at the receiver (for digital signals) or excessive waveform distortion (for analog signals). This can be done in a number of ways:

Note that crosstalk is a reciprocal process; if two traces carry the same type of signal, the victim trace will induce the same crosstalk signal on the aggressor trace. This means that solving a crosstalk problem for one net will also suppress crosstalk on its aggressor.

Whether you route the victim signal on a different layer or increase spacing, you may need to check length matching in your traces. Routing through a via produces additional propagation delay, which can induce skew in parallel nets or differential pairs. Note that you can route one end of a differential pair through an internal layer if you like as long as you maintain differential impedance.

Once you’ve changed your routing or layer stack, check your layout again using the Crosstalk Analysis and Impedance Analysis workflows in Allegro. This will ensure you’ve maintained impedance control while reducing crosstalk to an acceptable level. 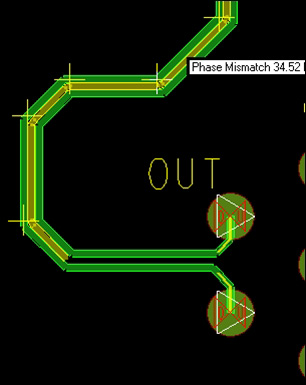