Abstract: Fully automated mesh generation has been a goal in the Computational Fluid Dynamics (CFD) community for decades. Although unstructured mesh generation was the panacea to the difficulties in meshing complex geometries relative to structured grids, a few unstructured meshing methods were unsuitable for viscous simulations. Meshes apt for viscous simulation require specialized node distributions or the addition of extruded meshes. This hybrid approach typically involves user interaction to define where these extruded meshes are constructed. Cadence® Fidelity™ Pointwise® Mesh Generation can import a geometry model to which attributes have been applied to avoid user interaction and thereby automate the mesh generation process. These attributes are applied to the geometry model during the design process and are used by Fidelity Pointwise to automatically mesh the model for viscous CFD. 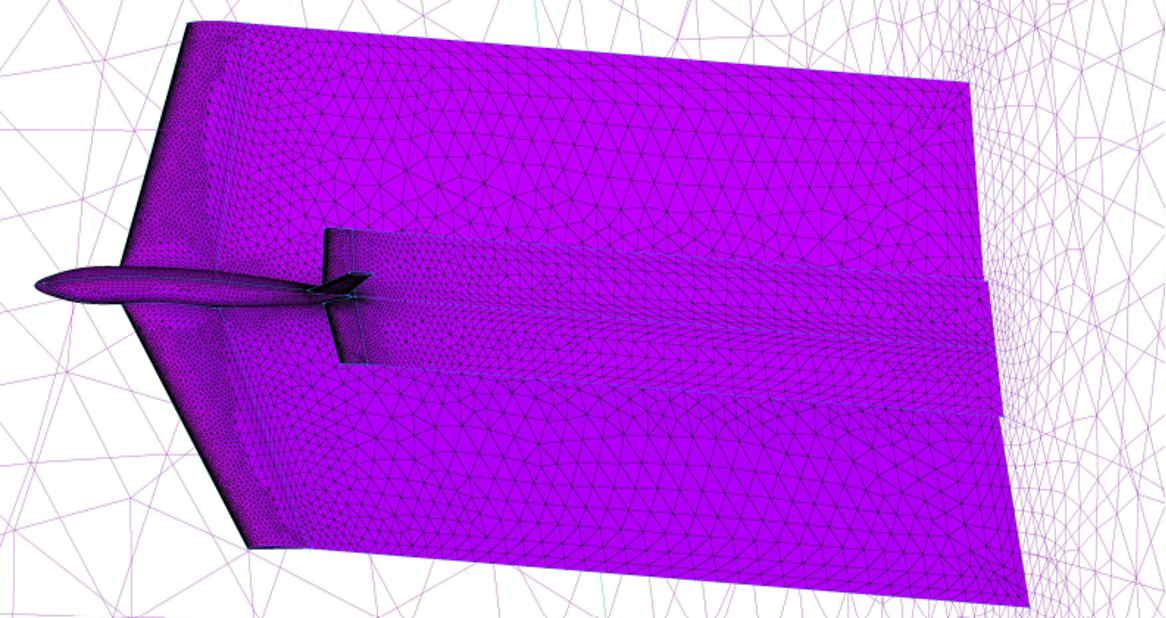 Geometry definition is the starting point for any mesh generation endeavor, which is also crucial for the automation process. Fidelity Pointwise can import geometry in many formats such as IGES, STEP, EGADS, and NMB. The NMB format is the native Pointwise geometry format which can also hold attribution data on components within the geometry model such as faces, edges, and vertices.

A closed geometry model contains surfaces for all boundaries of the expected computational domain. When the model has trimmed surfaces that meet established tolerances, it is said to be watertight.

Attributes can be applied to various geometry entities when designing a geometry model in the Engineering Sketch Pad (ESP) software. Those attributes are saved in ESP’s EGADS file, from which an NMB file can be created. Entities in the geometry model can also be attributed interactively to Fidelity Pointwise’s graphical user interface (GUI). The attribution scheme allows the user to label geometry entities with information that can guide the automatic mesh generation.

Attributes assigned to geometry models are global attributes. They pertain to volumetric meshing operations, such as T-Rex extrusion and isotropic tetrahedral meshing. Any model attribute read from the geometry file will override the default parameters. These attributes will be applied to the volume mesh before it is initialized.

Attributes assigned to geometry faces pertain to surface meshing operations. Many recognized key-value pairs are mirrored after the user-selectable options in the Pointwise GUI. Quilt assembly can be controlled by assigning the same quilt name to multiple geometry faces. Fidelity Pointwise will attempt to combine those trimmed surfaces into a single quilt.

Edge attributes impact dimensioning (number of grid points) and clustering of points along curves. Grid curves (connectors) impact the resolution of the surface meshes (domains), which then affects the volume mesh (block). Minimum and maximum dimensions are defined early in the process and maintained with each step.

The only node attribute is a spacing value. If present, it is applied to every connector utilizing that node.  Users often have specific spacing values in mind for certain locations in the mesh, such as leading edges and trailing edges of wing components.

For this discussion, mesh automation was implemented via a Glyph script (called AutoMesh) to generate a high-quality unstructured mesh suitable for CFD analysis. The precise number of points in the mesh is not directly controllable; it is an outcome of the procedures. A set of best practices are strictly enforced throughout the mesh generation process.

A top-level view of the mesh generation flowchart is shown in Figure 1. The process begins at the upper left with “Start”, where the global parameters are loaded. Next, the geometry is loaded and processed by Fidelity Pointwise, creating quilts. If no user instructions are provided through attribution, this typically results in one surface mesh per geometry face. With attribution, some combining can be performed, such as combining multiple upper or lower wing surface geometry faces into a single mesh.

Automation is enabled in the second block, where domains are created from the assembled quilts. This process is enabled in Fidelity Pointwise when default connector dimensions are defined or the average connector spacing value is defined. Two domains should share each connector, except for some baffle surface connectors. 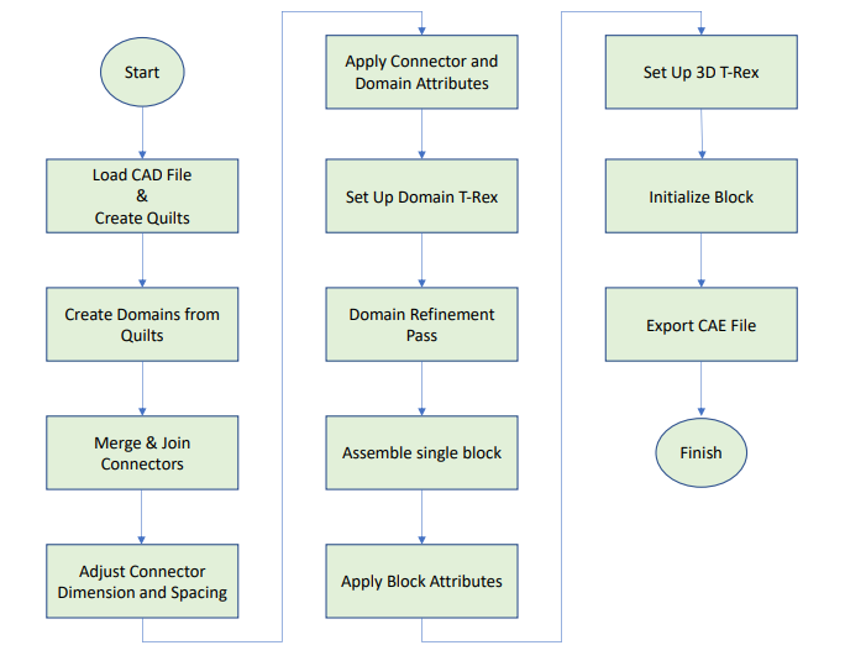 A significant amount of time is spent adjusting the connector dimensions and point distributions. Next, the dimensions are adjusted based on the turning angle in the direction of the connector or deviation from the curve shape. Each connector is evaluated as a possible edge for the surface T-Rex meshing during this step. T-Rex is the advancing layer technique used by Fidelity Pointwise to create layers of elements by marching away from initial edges in surface meshing or faces in volume meshing.

Users can perform a curve-based mesh adaptation pass on the connectors. This involves two steps:

The following cases demonstrate meshing that is possible with AutoMesh on a variety of geometric configurations. AutoMesh makes no assumption regarding the type of geometry that is supplied. Some cases are created from IGES files with no attribution data. Other cases are included to illustrate the use of geometry attribution to guide the mesh generation.

The first case is a mechanical part contained in an IGES file. The first mesh uses the default input parameters, which results in a Delaunay-style surface mesh and no adjustments due to geometry curvature. The second mesh changes the style to advancing front and captures surface curvature exceeding 10 degrees and hard edges exceeding 30 degrees. The short edges in the gaps of the structure are resolved, and the mesh blends smoothly across the surface. The second mesh enhances the resolution in high curvature regions of the geometry.

A quadratic high-order mesh was created for a generic cowboy hat. The IGES file was imported into Fidelity Pointwise, and all surface patches were attributed with the boundary name “hat” and a viscous wall spacing of 0.001. An outer bounding box five body lengths away was constructed during the initial steps of the AutoMesh process, permitting the volume around the hat to be meshed. A curvature turning angle of 20 degrees was specified.

AutoMesh instructed Fidelity Pointwise to create a triangular surface mesh. The specified wall spacing on the geometry initiated a T-Rex extrusion into the volume. On export, Fidelity Pointwise curved the mesh to quadratic order. The high-order nodes on the hat surface and a crinkle-cut through the volume mesh at the tip of the brim are shown in Figure 7.

A fan assembly is defined on a circular plate, shown in Figure 18 through Figure 23. Quilting was used to combine the nine individual faces on the top of the assembly into a single quilt. The AutoMesh script automatically creates an outer box boundary. All boundaries were named. The resulting mesh contained all tetrahedra.

The ability to automatically generate a suitable mesh for viscous CFD has been demonstrated using  geometry attribution, the assignment of meshing data and parameters to the geometry model during the design process, or as a meshing preprocessing step. With the geometry adequately attributed, the mesh generation process can apply the appropriate meshing techniques to ensure suitability. Lacking attributes, the meshing procedure can utilize built-in best practices to generate the mesh.

If you’d like to try Fidelity Pointwise on your CFD applications to see Automatic Unstructured Mesh Generation with Geometry Attribution, request a demo today.