Cavitation is a phenomenon in which rapid changes of pressure in a fluid lead to the formation of vapor-filled cavities or bubbles, in places where the pressure is relatively low. It can lead to structural damage due to the bubbles imploding when subjected to higher pressure, but it can also cause instabilities and increased noise. Still today it is one of the most challenging topics that CFD engineers have to tackle and it occurs in many different sectors such as marine propellers, hydrofoils, torpedos, pumps, etc.  Many publications cover the subject, sometimes from a different point of view, starting from cavitation inception up to its real physical modeling, using pragmatic approaches or more sophisticated models. With this blog article NUMECA would like to share some of its know-how, summarizing state-of-the-art CFD technologies for cavitation prediction, covering different applications and CFD features to answer the engineer's needs.

To study cavitation inception initially, the engineer can be tempted to look only at the pressure level in the 3D field. All places where the scalar field of the total pressure is lower than the vapor pressure, are marked so that the total volume of possible cavitation occurrences can be computed. This approach can not give an exact prediction of the cavitation and its consequences, but it can already provide a good insight. It is what Sirehna from Naval Group has done in their publication at Nutts in 2016. Whatever the approach chosen, an accurate pressure field is clearly necessary. Hence, they have used a dynamically and locally refined grid approach where pressure hessian is the most important. 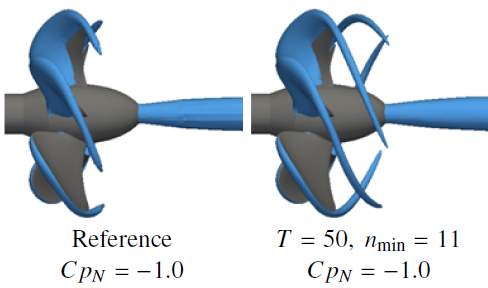 To model the physics of cavitation, a first method makes use of a single fluid approach. The evolution of density and static pressure are linked through a robust barotropic law, enabling macro simulation of the cavitation phenomena1. User inputs are minimal and no additional transport equations are required. The barotropic law is used to evaluate the local density as a function of local static pressure in the cell. According to the local value of density and corresponding vapor pressure, the computational cell can be considered as filled fully with liquid ( = L), vapor ( = V), or a mixture of both. The profile of the barotropic law in the mixture region is determined by a basic cosinus function. 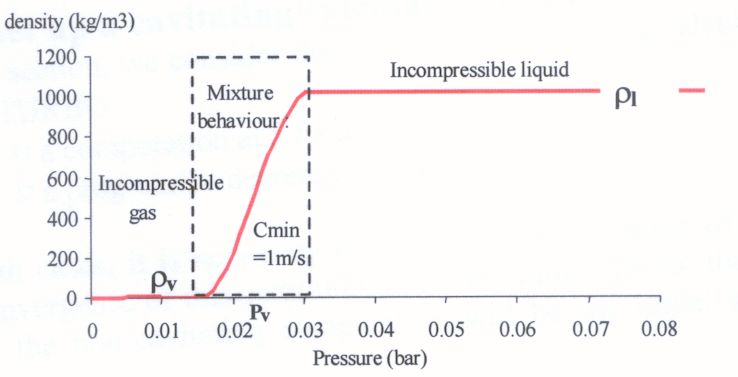 The barotropic law approach can be easily understood when looking at below example showing the direct relation between density and local pressure. Indeed, one can see, as the pressure is lower than the saturation pressure, how local density drops to a mixture of vapor and liquid in case the barotropic law is used. 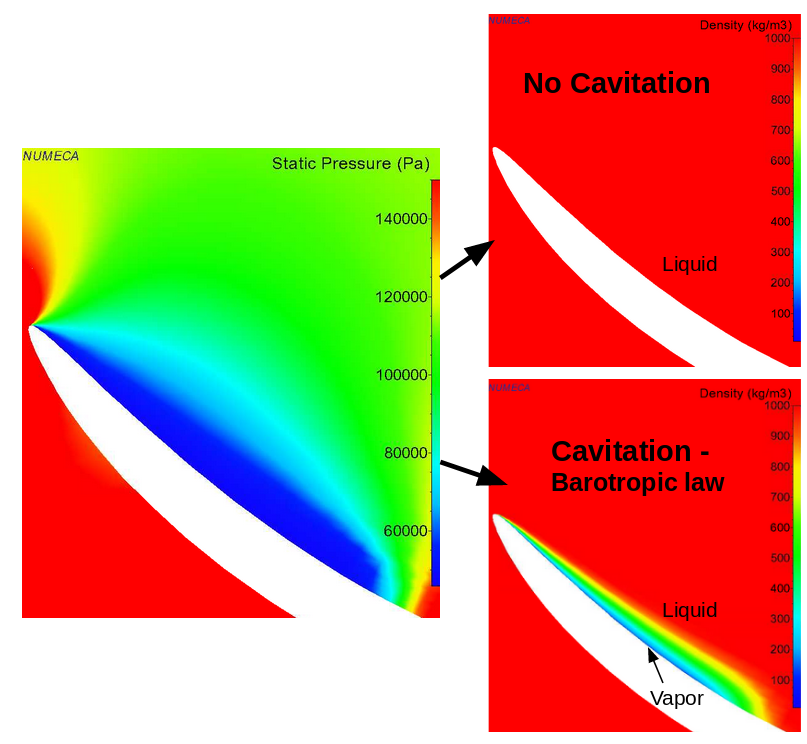 Another way to model cavitation in CFD is by solving an additional transport equation for the vapor mass or volume fraction. Different models like Singhal3, Zwart4, Tani5, Merkle6, Kunz7, Sauer8, etc. exist. The models put the pressure in relation to the saturation pressure to determine a source term, based on the Rayleigh-Plesset equation for bubble dynamics. Of course, they require careful treatment and validation of their coefficients. Thermal effects can be included.

When a very precise description of the density in function of pressure and enthalpy is required, the use of thermodynamic tables is suggested. Thermodynamic tables contain the real thermodynamic properties of a particular fluid. They are introduced in the Navier-Stokes equations for mixtures and provide the modeling of the real fluid, taking into account the correct thermo-sensitivity of the saturation pressure.

A typical cavitation application is the generation of NPSH-Head curves for pumps. This curve shows how the head of the pump will decrease in function of the net positive suction head (NPSH) (the difference between inlet pressure and vapor pressure in the pump). Analyzing the curve below, the pump user is informed about the inception of cavitation and till which NPSH they can operate the pump at a specific operating point before cavitation becomes too intensive (usually referred to as NPSHr, for example corresponding to a head drop of 3%). High cavitation is noticeable as a strong loss in head generated by the pump. With the NPSH, a function of the used system, and NPSHr, a property of the installed pump, it’s key to have this NPSH higher than the NPSHr to avoid pump damage and intolerable noise. 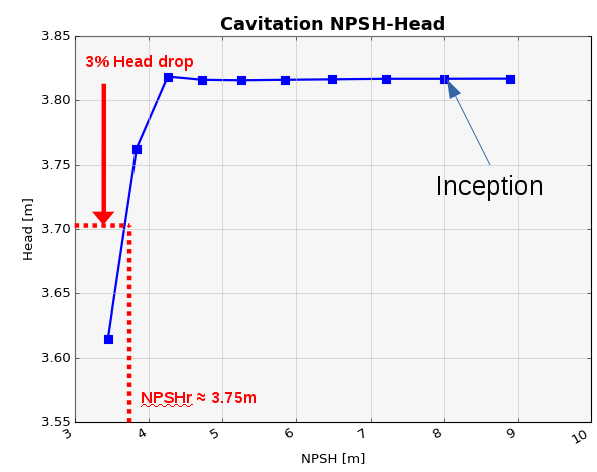 The NPSH-head curve can be computed numerically by increasing the vapor pressure step by step for a defined operating point of the pump. The increasing vapor pressure will result in a decreasing NPSH, a growing cavitation area and finally a drop in pump head when cavitation becomes too extensive. An example is given below for the SHF pump. One can see how the cavitation at the leading edge of the pump blades increases, with the NPSH decreasing until it covers a large part of the blade.

All these test cases have something in common: having a dense and uniform mesh is mandatory since we are looking for local flow particularities, pressure gradients, thin layers or bubbles of cavitation. Without such a mesh, the correct physics is easily lost or not even captured at all. Besides, most of the times cavitation is an unsteady phenomenon and as such difficult to predict. Where will it be located? How intense will it be? Questions like these are the reason why a dynamic grid adaptation based on a cavitation criterion has been implemented. During the simulation, the solver adapts the mesh and refines where necessary to reveal the presence of cavitation on too coarse meshes. The illustration below is proof of this concept.

The take-home message of the article is that choosing the right path according to the objective is essential. Is it enough to be aware of the presence of cavitation? Should performance prediction be taken into account? How accurate should the modeling be? The answers to these questions will lead to different mesh size and number of equations to solve. CPU time will be impacted accordingly. Mesh density and uniformity are definitely important in all cases and cannot be neglected.

The good news is that NUMECA offers a wide range of tools to model cavitation, accompanied by guidelines for many applications.

Wout Poncelet holds a master of science degree in Mechanical Engineering (Aero- and space engineering) from the University of Leuven (Belgium) where he graduated in 2016. Since 2017, Wout has joined NUMECA as part of the Turbomachinery application team.