Turbochargers are currently ubiquitous in automobiles. It is nearly impossible to find a new Diesel vehicle without turbocharging and direct injection. Gasoline cars have been also following suit for the past few years. Regulations are pushing for lower emissions and the way to achieve this has been downsizing and using turbocharging to offset the lower power density of a smaller motor.

It is very important to capture appropriately the interaction between the turbomachinery components (impeller and diffuser) and the volute so as to be able to predict and minimize the pressure losses. Computational Fluid Dynamics (CFD) is frequently used for simulating this behavior. 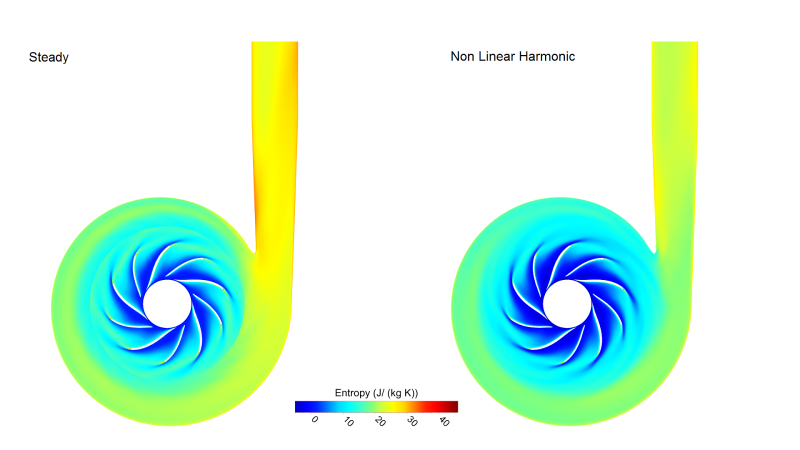 While it is possible to obtain an accurate prediction of the pressure loss by using a steady simulation, impeller-volute interaction can cause instabilities that can impact the performance of the turbocharger. For this, an unsteady analysis is used which is quite more costly and rarely happens in the design phase but rather in the validation phase of the design cycle.

To avoid running a costly analysis and for the designer to be able to incorporate this analysis in the design phase, frequency-domain simulations like the Non Linear Harmonic (NLH) Method currently implemented in the NUMECA tools are employed. NLH solves the fluid equations in the frequency domain, only needs to simulate one blade passage instead of the full wheel and the equations are solved in a steady manner thus enabling the use of convergence acceleration techniques. It allows for an unsteady solution - including the transport of information through the impeller-volute interface - at a cost similar to a steady one.

Figure 2: Static pressure fluctuation contour showing the pressure wave propagation from the impeller to the volute

Capturing this interaction is quite important. The reflected waves can have a negative impact on the performance of the system as they can cause instabilities to the impeller such as rotating stall, increased losses, and increased forcing on the blades. The phenomenon cannot be captured by a steady (mixing plane) approach due to the averaging of the flow quantities in the impeller-volute interface or by a frozen-rotor approach. Hence a costly, unsteady simulation or a more cost-efficient harmonic (NLH) simulation is the way to capture this behavior.

This analysis can be used in any configuration, centrifugal or not, and can provide insight about the interaction between turbomachinery components and devices upstream or downstream early in the design phase while keeping the simulation cost low.

Thanos got a Mechanical Engineering degree from the National Technical University of Athens, Greece in 2011. After completing the mandatory military service, he went on to study to Turbomachinery Aeromechanics at the Royal Institute of Technology (Sweden), the Université de Liège (Belgium) and Duke University (USA) through the THRUST Erasmus Mundus Programme where he obtained a Master's Degree in Mechanical Engineering while working on problems such the minimization of forcing in turbomachinery blades, engine start-up forced response analysis and non-synchronous vibrations. In 2014, he joined NUMECA as an account manager to manage the full sales cycle for the turbomachinery industry and since 2016 he is a Turbomachinery CFD Engineer helping other engineers solve their CFD problems and creating content to promote CFD in the turbomachinery industry.