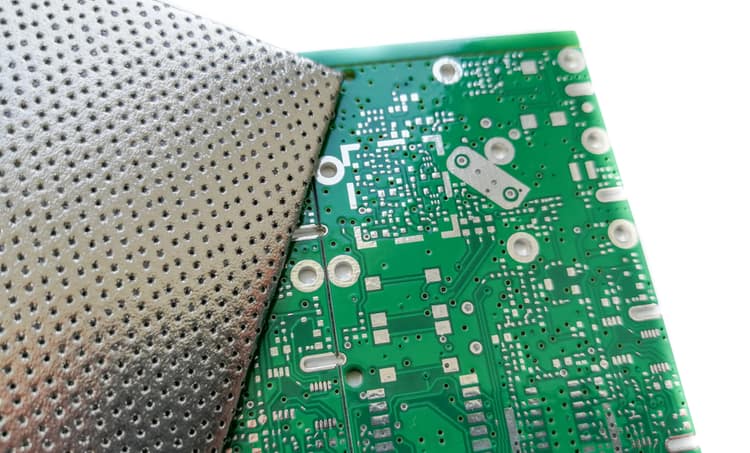 Any electronic device you design must be compliant with EMI standards set by regulatory boards like CISPR, FCC, or IEC. So, how do designers ensure that EMI standards are met?

Creating products that meet EMI standards begins during the design phase. During this process, various measures—such as the proper placement of components, avoiding sharp bends, and grounding planes—are put in place to reduce EMI. In the final stages of product development, EMI testing is carried out to check whether the EMI of the product is within acceptable limits.

How Do EMI Shielding Techniques Work?

Using a Faraday cage is the oldest EMI shielding technique used in electronic circuits. This technique is also called volumetric shielding, where a metallic screen surrounds the sensitive circuit on all sides. This technique is also used to shield cables that transmit signals. The metallic screen absorbs the radiated or conducted EMI and prevents it from reaching sensitive electronics. Volumetric shielding is expensive, as poor air circulation inside the enclosure demands excellent thermal management.

Let’s take a look at some of the growing trends in EMI shielding.

When a product or circuit is nested inside several levels of shields, it forms a nested shielding. This prevents interference between different components. Each level of shield may or may not be a Faraday cage. The material used for building each level differs.

This method of EMI shielding is more cost-effective than a single shield made of one material and the device’s EMI compatibility is greater with nested shielding.

EMI shielding in PCBs functions to isolate ICs, passive components, and active components from interfering with each other. All this produces EMI, noise, and crosstalk. The parallel traces in PCBs are mostly the source generating EMI. As the spacing between parallel traces decreases, the effect of EMI increases and results in signal degradation.

The routing of traces as differential pairs is one EMI shielding technique used in PCBs. Another technique is to include a grounded trace between two signal traces. The grounded trace, otherwise known as guard trace, can reduce the cross-talk between two common-mode or differential pairs of signal traces. Guard traces are mostly used to reduce crosstalk in analog and digital traces.

Via fences are constructed in PCB boards to shield microstrip and stripline transmission lines. The via fence is formed by placing multiple rows of vias along the signal trace. The via fence, also called via shielding, reduces crosstalk and EMI in RF circuits, especially the ones with antennas. These are also used to shield ICs, components, and circuit blocks from each other.

Use EMI Shielding Techniques to Increase EMI Compatibility in Circuits

When designing densely routed PCBs, incorporating EMI shielding techniques such as nested shielding, guard traces, or via shielding can help increase the EMI compatibility of a circuit.  Cadence’s software offers PCB system design tools that can help the designer to implement EMI shielding in circuit boards.